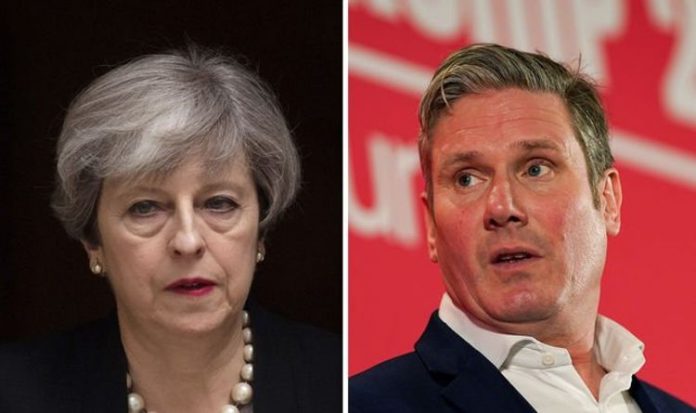 The Labour Party leader clashed with former Prime Minister Theresa May over the Brexit deal today as the House of Commons prepares to vote on the UK’s trading agreement with the EU. Sir Keir Starmer has said he will ask his party to support the agreement, despite having been a long-standing Remainer and branding Prime Minister Boris Johnson’s deal “thin”. But Mrs May hit back at the Labour leader today, saying she will “take no lectures” from him. The former Conservative Party leader said: “I welcome this deal and I will be supporting it today.

“And I welcome the fact the official Opposition will be supporting this deal but I did listen with some incredulity to what the leader of the Opposition said.

“So I will take no lectures from the leader of the Opposition on this deal.”

The fiery clash highlights the huge differences that exist between Labour and the Conservatives on Brexit.

She announced she would step down in May 2019 after her Brexit deal was defeated in the Commons three times.

After her tearful speech outside Number 10, Sir Keir admitted he “felt something” as he praised Mrs May for her efforts.

He said: “Whether you agree with her or you don’t, this was a woman broken who had tried to genuinely deliver on what she thought she had to do … I can’t pretend I didn’t feel something.”

Despite this, Sir Keir also hit out at the then Prime Minister for her failings, adding that these must be considered before “you start feeling sorry”.

He said: “I watched that speech. And I’ve watched it more than once. As all my colleagues rightly point out, before you start feeling sorry, remind people about Windrush.

“Remind yourself that this was a Prime Minister who wouldn’t even keep her promise on child refugees currently within Europe.

“That has to be the background. All that said, I can’t pretend that as she broke in that last 20 seconds, that I didn’t feel for her because this was a person broken.”

“You can understand why the EU, thinking every time they’ve given us a deadline we’ve extended under Theresa May, you can’t blame them for trying with Johnson.”

Mrs May’s first extension was granted on March 21, 2019. The UK and the EU agreed to extend Article 50 until either May 22, subject to MPs approving the withdrawal agreement, or failing that until April 12.

After MPs rejected the deal for the third time, Mrs May wrote to then President of the European Council Donald Tusk requesting a second extension until June 30, 2019.

The EU27 agreed two options – an extension until June 1 if the UK failed to hold European Parliament elections – or an extension to October 31 if it did.

Then it was Boris Johnson’s turn to secure an extension to the withdrawal deadline. After a general election landslide in December 2019, he eventually passed his deal, taking the UK out of the EU in January 2020.

And now, after months of haggling, the EU and the UK have finally reached a trade deal which is also expected to pass through Parliament.