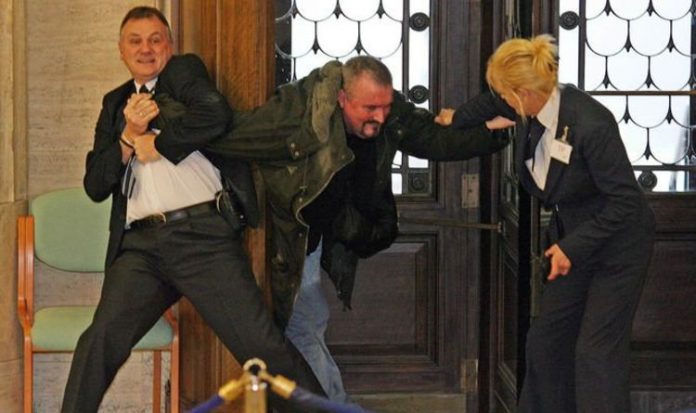 One of the most notorious paramilitaries of the Troubles, he killed three people in a gun and grenade attack during an IRA funeral at Milltown Cemetery, Belfast, in 1988. Last year families of the victims had taken legal action, arguing Stone was not entitled to another parole attempt, but the Court of Appeal found against them. That paved the way for a second, and successful, attempt at parole. The family of Thomas McErlean, 20 – who was killed together with John Murray, 26, and Kevin Brady, 30 – said in a statement: “As a family we have pursued legal action to try and ensure Stone remained imprisoned.

“It is unjust Michael Stone is able to move forward with his life when he took the lives of Thomas McErlean and many other people.”

Before now Stone, who was given a 30-year jail term, had not been due for release until 2024, having failed in an earlier parole bid. The 65-year-old was released from Maghaberry Prison, near Lisburn, yesterday.

As well as the Milltown Cemetery murders, he was convicted of three other killings.

He was found guilty of murdering milkman Patrick Brady in south Belfast in 1984, carpenter Kevin McPolin who was shot in the head in Lisburn in 1985 and bread delivery driver Dermott Hackett, who was hit 16 times with a submachine gun in his work van in 1987.

After being freed under the Good Friday Agreement in 2000, Stone was sent back to prison after entering Stormont armed with explosives and an axe in an attempt to murder Sinn Fein leaders Adams and McGuinness in 2006.

Stone denied it had been a bid to kill the politicians, instead claiming it was “an act of performance art”.