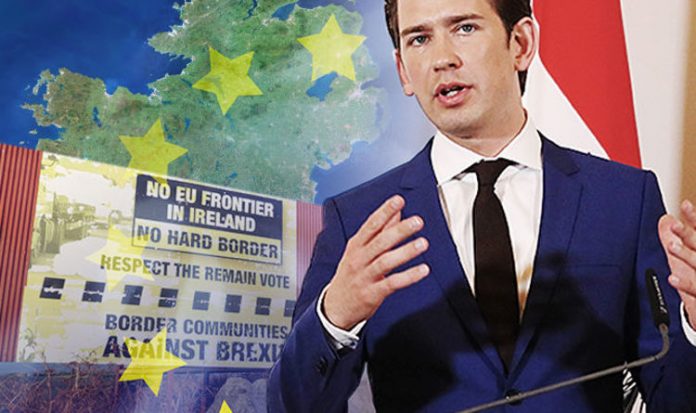 Speaking at press conference, Mr Kurz was challenged on the current state of Brexit negotiations under which he will oversee for the next six months as the head of the European Council’s rotating presidency.

Negotiations between Westminster and Brussels have been at a virtual standstill for the last few months as leaders fail to reach any agreement on the Irish border. The lack of progress has seen the European Commission ramp up its warnings for no deal preparations.

While discussing the future of the negotiations, Mr Kurz said talks should be prolonged and continued even with no Irish agreement in order to avoid a so-called hard Brexit.

The Austrian Chancellor told reporters in Vienna he “would be in favour of pursing negotiations rather than a hard Brexit” if no agreement is found in time to avoid a hard border in Ireland.

On a potential extension to the two-year Article 50 period, he added: “Our goal is we reach an agreement with the UK but if that’s not possible we have to avoid a hard Brexit.

“Our goal is clear. If not, it’s good to enough negotiations. We will see.”

Mr Kurz also reinforced he would not allow EU member states to be divided by Britain as Westminster negotiates its way out of the bloc.

The EU should “speak with one voice but should penalise the UK,” he added.

Brussels is still waiting on Theresa May’s Brexit white paper which she will finalise on Friday as she hosts her Cabinet for an away day at Chequers.

The Prime Minister is said to be proposing a third customs option, Britain will seek to follow EU regulations on goods in order to ease trade.

As part of a “facilitated customs arrangement” – Westminster’s latest buzzwords – Downing Street aides estimate that 96 percent of imports from outside the EU will not need tariffs. New digital customs technology will be used to swiftly determine the destination of such goods to ensure the tariffs are not charged.

For the remaining 4%, UK border officials will collect EU tariffs when the goods arrive. Businesses will later be allowed to claim the cash back as long as they can prove the goods were sold in the UK and not exported to other EU countries.

Mrs May will have to win the support of the Government’s Brexiteers, who may be open to her compromise because of the UK’s lack of no deal preparations.