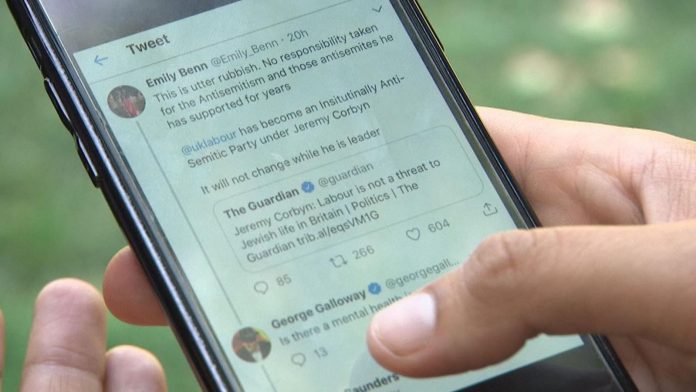 A Labour activist attacked online for speaking out on anti-Semitism has accused some of Jeremy Corbyn’s supporters of making a “mockery” of his hope for a kinder, gentler politics.

Emily Benn, who stood twice for the party as a parliamentary candidate and is a granddaughter of socialist stalwart Tony Benn, told Sky News that online, Labour is an “increasingly intolerant and unfriendly place to be”.

She was bombarded with messages over the weekend after calling on Mr Corbyn to take stronger action to root out anti-Semitic Labour members.

“Is there a mental health issue here?” former Labour MP George Galloway tweeted her in response to a claim the party had become institutionally anti-Semitic.

If Mr Galloway is questioning my approach to fighting Anti-Semitism in Labour, then perhaps I’m doing something right

Though I must say: Questioning someone’s mental health – purely because you disagree with their political opinion – is pretty shameful

We are better than that pic.twitter.com/XyluMTKP3T

Another Twitter user messaged: “You could probably power a medium-sized town from the energy generated by your grandfather’s rate of rotation in his grave.”

“I hope you get cancer,” a further one said.

Ms Benn told Sky News the posts were “symptomatic of the way that people think it’s acceptable to treat fellow members of the Labour party”.

She said: “This is not how we get people involved in politics, this is not rational, kind, gentle debate, this is a complete mockery of that slogan.

“It has become sadly an increasingly frequent act of people online that the minute you say anything that disagrees with Jeremy Corbyn you are immediately called a traitor and told to join the Conservative party.

“Online especially, the Labour party is an increasingly intolerant and unfriendly place to be.

“It is not representative of the Labour party that I joined and it is bad both for Labour and for politics more widely.”

Asked what her grandfather’s thoughts would be on the Labour anti-Semitism row, Ms Benn said: “I think he would want everyone that has a view to be free and fair and able to speak up and say what they believe.”

She added that Mr Corbyn needed to show “real leadership” and stand up to Labour members using his name talking down the problem with anti-Semitism.

“You have to take on people on your own side, real leadership is telling people who support you this is not okay, whether it’s #WeareCorbyn or #JC9, these are all being done in his name,” Ms Benn said.

“I don’t think he’s completely taken on these people in the way that he could. That’s real leadership and that’s what he’s lacking.”

Mr Corbyn wrote an opinion piece for The Guardian on Friday that insisted people who “dish out anti-Semitic poison” did not do so in his name.

He acknowledged that there was a “real problem” with anti-Semitism but that Labour was “working to overcome” it.

Mr Corbyn guaranteed the security of the Jewish community by “whatever measures necessary”.