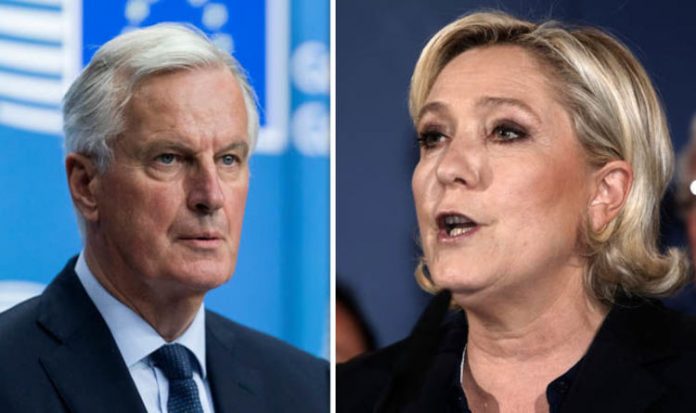 The survey, compiled by Reuters and based on national opinion polls conducted in the EU27 nations, points to a rise in anti-EU transnational groupings in the Parliament next year.

The Europe of Freedom and Direct Democracy (EFDD) grouping, which includes parties such as UKIP and Italy’s Five Star Movement, could increase their number of seats from 45 to 59.

The Europe of Nations and Freedom (ENF) grouping, which includes Marine Le Pen’s French National Rally party and Geert Wilders’ Dutch Freedom Party, could also nearly double their number of seats to 63 from 35.

Speaking exclusively to Express.co.uk, UKIP MEP Margot Parker commented on the findings, stating: “It is interesting to note that, according to a new poll, Eurosceptic parties could expand their strength in the European Parliament by more than 60 per cent at the elections next May.

“The snapshot shows that the UK is not only one in its desire to leave the EU and member states across Europe are turning against the aims of this autocratic organisation.

“It also shows that those in favour of leaving the EU are not intimidated by the bullyboy tactics the EU is asserting over this country’s desire to get out!”

Their overall percentage within the parliament would also rise to 17.3 percent from 10.6 percent, aided by the UK’s departure from the bloc.

Populist parties would consequently have increasing sway in the EU and have a larger impact over legislation.

The trade bloc has witnessed a sharp rise of anti-establishment political parities, following the election of Italy’s coalition government, which comprises the populist Five Star Movement and the far-right League.

Hungary’s Prime Minister Viktor Orban was also elected on an anti-immigration platform, and has submitted a bill to make it illegal to aid illegal immigrants.

Ms Parker has previously called on the UK Government to take a more hard-line stance with EU chiefs in relation to Brexit negotiations.

She said: “We must not become a ‘vassal state’ of the EU.

“The British people voted to leave and now the EU waves a big stick at us, it appears we are leaving in name only.

“We need to leave under the terms we voted on; to take back control of our borders, waters, finances and laws.”

The survey was based on polling data conducted by a variety of bodies in the 27 remaining member states of the EU, and provides a “rough” snapshot of anticipated voting tendencies.

The analysis focused on the existing transnational party groupings in the current EU parliament.

New party alignments will be determined by in-depth negotiations following the election next year.