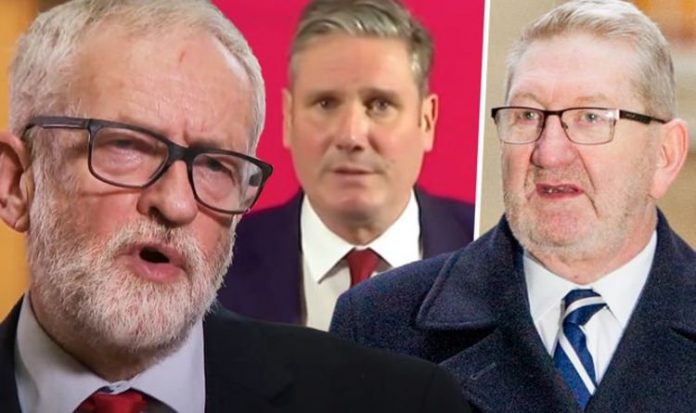 The Labour Party is facing huge division after Sir Keir took the decision to suspend former leader Mr Corbyn. It came after a damning report from the Equality and Human Rights Commission (EHRC) concluded that the party, under Mr Corbyn, “seriously” failed in addressing antisemitism. Sir Keir said it was a “day of shame”, adding that he would “change the culture” of Labour “as soon as possible”.

Attention is now on the party’s Left and slew of Corbynite MPs that fill its ranks.

Signals that the radical Left are unsatisfied with Sir Keir were already clear even before the suspension.

It is now widely believed that such conflict will become more widespread as Sir Keir steers Labour further from its socialist mould.

Labour: The party could find itself in the midst of a civil war as Corbyn gets the boot (Image: GETTY/BBC/Sky News)

Keir Starmer: The Labour leader said Corbyn was ‘part of the problem’ with antisemitism in the party (Image: GETTY)

Steven Fielding, Professor of Political History at the University of Nottingham who specialises in the politics of the Labour Party, told Express.co.uk that Mr McCluskey’s “beef” with Sir Keir rested entirely on the issue of antisemitism.

He said: “There are deep suspicions in parts of the Left and Corbynite Left.

“McCluskey’s specific beef with Labour and the reason why Unite has reduced its Party funding by ten percent is because of the antisemitism issue.

“Most members will think this is an odd thing to focus on, yet it’s a very hard Left, a hard Corbynite position that McCluskey has.

Jeremy Corbyn: The former leader has said he intends to contest the decision (Image: GETTY)

“It kind of shows the ghetto that the hard Left may be operating at the moment.”

Mr McCluskey has previously said he “supports” Sir Keir in his leadership.

The more radical groups within Labour have long since opposed Sir Keir’s leadership.

Express.co.uk has reported on groups like Momentum, who previously called for a vote of no confidence in the new leader.

Socialism: The pair were extremely close allies an revamped who unions operated in Labour (Image: GETTY)

day Times’ Whitehall correspondent and author of ‘Left Out’, Gabriel Pogrund, has suggested that three Socialist Campaign Group (SCG) MPs say they are currently leaning against resigning the whip in solidarity with Mr Corbyn.

If true, this could further expose a rift between those who wish to leave Corbynism to follow Sir Keir and his new direction and those who will resist change going forward.

In response to Mr Corbyn’s departure, a Labour Party spokesman said: “In light of his comments made today and his failure to retract them subsequently, the Labour Party has suspended Jeremy Corbyn pending investigation.

“He has also had the whip removed from the Parliamentary Labour Party.”

Sir Keir told reporters shortly after the decision: “If – after all the pain, all the grief, and all the evidence in this report – there are still those who think there’s no problem with antisemitism in the Labour Party, that it’s all exaggerated, or a factional attack, then, frankly, you are part of the problem too.

“And you should be nowhere near the Labour Party either.”

Mr Corbyn has called the move “political” and promised to “strongly contest” it.

Antisemitism: Corbyn said the allegations had been ‘overstated for political reasons’ (Image: GETTY)

This included staff influencing decisions on suspensions or whether to investigate a claim.

In a statement, Mr Corbyn said as leader he was “always determined to eliminate all forms of racism and root out the cancer of antisemitism”.

However, the vital comment that led to his suspension was his insistence that “the scale of the problem was also dramatically overstated for political reasons by our opponents inside and outside the party, as well as by much of the media”.

He added: “That combination hurt Jewish people and must never be repeated