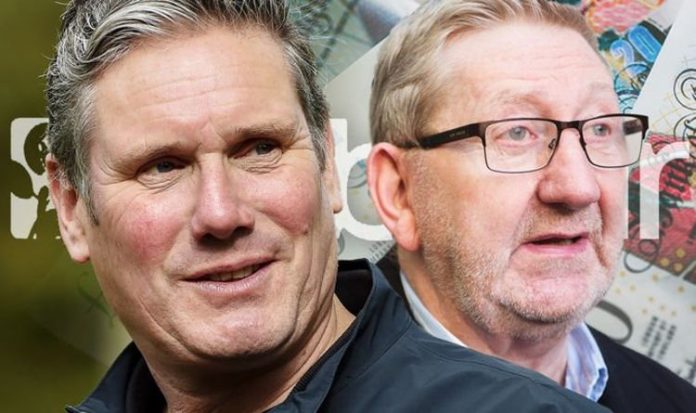 Unite the Union, Labour’s single biggest donor, has suffocated the party, cutting around 10 percent of its affiliation money. It came as the union’s General Secretary Len McCluskey and Labour’s new leader Sir Keir Starmer appeared to have conflicting visions for the party following the departure of former left-wing leader Jeremy Corbyn. While Sir Keir says he has a “very good relationship” with Mr McCluskey, the union man has accused the leader of abandoning the country’s working class.

There is anger elsewhere in Unite over Labour’s direction under Sir Keir.

One source told the BBC’s Newsnight that the Labour leader and his inner team were “just not listening”.

The party’s left was similarly reborn, with considerable power and influence being distributed to grassroots groups.

The funding cut, understood to amount to 50,000 members or £1million, will now be channelled towards those left-wing groups, a source told Newsnight, in order to support a socialist programme “which he sees as vital to produce a Labour victory in 2024”.

He said: “We know that it is this union’s financial support and dedicated activists that help ensure that the Labour Party is not just election-ready but sustained between elections.

“But we also want to use our political funding to support and nurture the newer voices in our movement.

Ahead of the meeting of Unite’s executive, the General Secretary told Newsnight another cut in funding might happen should the party’s course change too drastically under Sir Keir.

He said: “I have no doubt if things start to move in different directions and ordinary working people start saying, ‘well, I’m not sure what Labour stands for’, then my activists will ask me, ‘why are we giving so much money’?”

Mr McCluskey’s decision also coincides with criticism of the Labour leadership from the left for “failing” to hold the Government to account over its handling of the pandemic.

Unite has given the party more than £7million since the start of 2019 according to Electoral Commission records.

Mr McCluskey has repeatedly denied many of the allegations of antisemitism within the party under Mr Corbyn.

In August, he told The Observer: “There were lots of claims and criticisms that the Labour Party was institutionally antisemitic. I absolutely reject that.”

He has also pointed to a leaked report drawn up at the end of Mr Corbyn’s leadership in a bid to bolster his argument.

The document alleges that some staff opposed Mr Corbyn during the 2017 general election and sought to send his campaign wayward by taking money from his team’s control.

Although Unite has become synonymous with Labour, Mr McCluskey warned: “It would be a mistake if anybody took Unite for granted.

“I think that would be a mistake.”