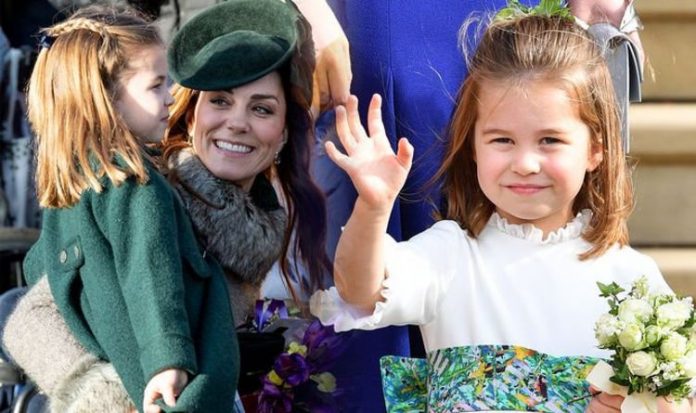 Princess Charlotte, five, is the only daughter of Prince William and Kate, Duchess of Cambridge. Charlotte currently attends school at St Thomas’s in Battersea and has already developed a reputation for her fun-loving nature. But as the daughter of a future monarch, a very important role in the family business no doubt awaits her when she is older.

Princess Charlotte will probably one day be a full-time working member of the Royal Family like her father and mother, unless she chooses to pursue a different career.

As she is still in school, Charlotte is usually only seen with her siblings at big royal events like Trooping the Colour or the Christmas Day trip to church.

However recently the Duke and Duchess featured a video of their children on their social media channels, where George, Charlotte and Louis asked questions about the environment to David Attenborough.

The video provided a rare insight into the trio’s personalities and was one of the first times Kate and William have put their children under the royal spotlight.

READ MORE: Prince Louis title: Why Louis will have to wait for royal titles

Royal commentator Victoria Arbiter wrote on 9Honey about the video: “Rarely has the British public been granted pre-arranged video of the Cambridges’ offspring, but in agreeing to the move William and Kate ticked multiple boxes.

“On top of highlighting what is a pivotal moment in the life of our planet, the children were empowered to play an active part.

“Destined as they are for a lifetime of royal service, it’s imperative they learn early on what their future roles will require.”

Ms Arbiter added the video helped the nation to “better get to know their working royals-in-waiting”.

And one title, in particular, is earmarked for Princess Charlotte should she decide to be a working royal.

Princess Charlotte will one day be the only daughter of the monarch, and the title of Princess Royal is usually given by the monarch to their eldest daughter.

The title has been in circulation for centuries and was believed to be inspired by the equivalent title of Madame Royale used in the French monarchy.

The title was first used in Britain in 1642 by Princess Mary, the daughter of King Charles I.

The title is currently used by Princess Anne, who is often praised for her hard-working attitude and dedication to public service.

Every year Anne is cited as one of the busiest royals, often completing more engagements in a year than any other royal.

The title is for life, but one day when it is vacant Prince William or even Prince George may decide to grant Charlotte the title.

If Charlotte is created Princess Royal, she will be expected to complete royal engagements and uphold the responsibilities given to her by the Crown.

And like Princess Anne to the Queen and her brother Charles, Charlotte will no doubt be depended on as one of her father and her brother’s most trusted family members.