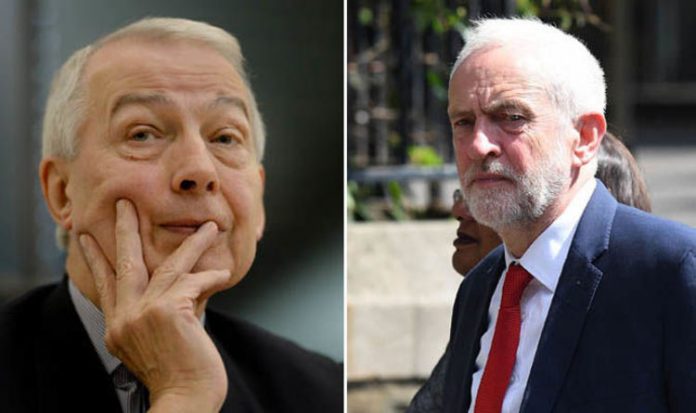 The MP for Birkenhead for almost 40 years, said in a letter to party chief whip Nick Brown that he could no longer serve the party as the leadership was overseeing an “erosion of our core values”.

The one-time minister for welfare reform, who was charged by Tony Blair to reform the welfare state by “thinking the unthinkable”, also rounded on his local party.

In the one-page letter he said the Birkenhead Constituency Labour Party was now governed by “a culture of intolerance, nastiness and intimidation”.

Earlier this year he was one of four Labour MPs who voted with the Government to prevent Britain joining a post-EU customs union, on the grounds that working-class voters “gave politicians a clear instruction to take the country out of the EU”.

In his letter Mr Field said: “I am resigning the whip for two principal reasons.

“The first centres on the latest example of Labour’s leadership becoming a force for antisemitism in British politics.

“The latest example, from last week, comes after a series of attempts by Jeremy to deny the past statements and actions by him were antisemitic.

“Britain fought the Second World War to banish these views from our politics, but that superhuman effort and success is now under huge and sustained internal attack.

“The leadership is doing nothing substantive to address this erosion of our core values.

“It saddens me to say that we are increasingly seen as a racist party. This issue alone compels me to resign the whip.”

Mr Field also raised concern about the “thuggish conduct” of some members in his local party and the lack of action against them.

He said the party’s actions served to “legitimise appalling levels of bullying and intimidation”.

Mr Field said that he intended to continue representing Birkenhead in Westminster as an Independent.

He added: “I also intend, providence willing, to represent those views when the next election is called.”

Senior moderates in Labour were distraught over Mr Field’s resignation.

Deputy leader Tom Watson said: “This is a serious loss to the party and I deeply regret Frank’s decision. It reflects both the deep divisions in the party and the sense of drift engulfing us. It is a major wake up call.”

The resignation comes as it emerged Labour received just £2 million in funding in the second quarter of 2018 with all donations over £100,000 coming from the Unions, as other donors desert the party, according to the latest Electoral Commission figures.

The drop off in money coming to the party has been linked to ongoing concerns over anti-Semitism in the party particularly from Mr Corbyn following revelations of comments he made and allegations he had laid a wreath at the memorial of terrorists who killed Israeli athletes.

The second quarter figures come after Labour declared their lowest ever first quarter donations, suggesting the party could be on track for their worst ever financial year since official reporting began.

“It’s now clear that long term donors have had enough of Mr Corbyn’s failure to deal with anti-Semitic racism within his party.

“We should all condemn racism in all its forms, and it’s time that Jeremy Corbyn kicks out of his party those people that say and do things that has no place in politics or in today’s society.”