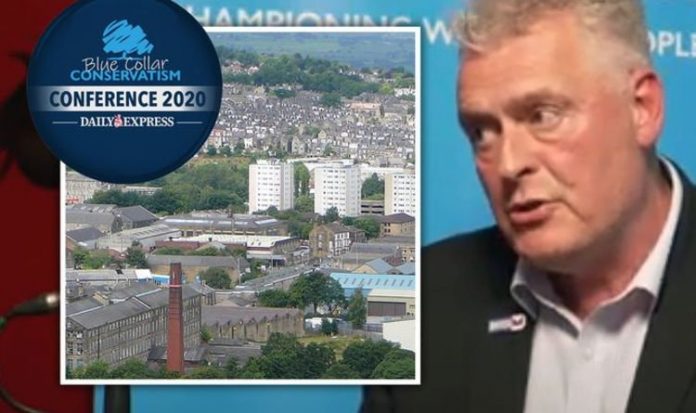 Lee Anderson said the 2019 general election results were comparable to the results of the 2016 referendum based on each area. He claimed the four-year stalemate with Brexit was the reason why many people voted Conservative – even if they were previously Labour supporters. It comes as Esther McVey asked Mr Anderson about a voter who purposely voted for the Conservatives in 2019 because of their plans to get Brexit done.

Speaking at the Blue Collar Conservatism Conference 2020, Mr Anderson said: “That resonates with my area.

“If you look at the referendum result in 2016 and compare that with the general election result last December, if you go area by area, it sort of replicates itself.

“I knew that’s what was coming.

“It’s not rocket science, people were fed up after four years of stalemate and at the end of the day it was get Brexit done and vote Conservative.”

Ms McVey added: “When we had that Red Wall collapse and now a Blue Wall, many say, ‘we’ve lent you the vote, Conservative Party. You must now do that leveling up agenda and engaging with all these different regions’.”

In the 2019 general election – Boris Johnson secured a staggering majority of 80 MPs in the House of Commons following his pledge to “get Brexit done”. Trade talks between the UK and EU are now reaching crunch point.

The Government has rebuffed a fresh demand from the EU to withdraw controversial legislation which could see the UK unilaterally tear up elements of the Brexit divorce deal.

At talks in Brussels on Monday, European Commission vice president Maros Sefcovic reiterated calls for ministers to scrap provisions in the UK Internal Market Bill giving them the power to override key provisions in the Withdrawal Agreement.

At a news conference following the meeting of the joint committee on the implementation of the agreement, Mr Sefcovic said the EU “will not be shy” in taking legal action if the UK fails to comply by the deadline of the end of the month.

“But those clauses are there.

“They are in legislation supported by the House of Commons as a safety net if need be.

“And those clauses will remain that Bill.”

Mr Sefcovic said the provisions in the Bill represented an “extremely serious violation” of the Withdrawal Agreement and of international law.