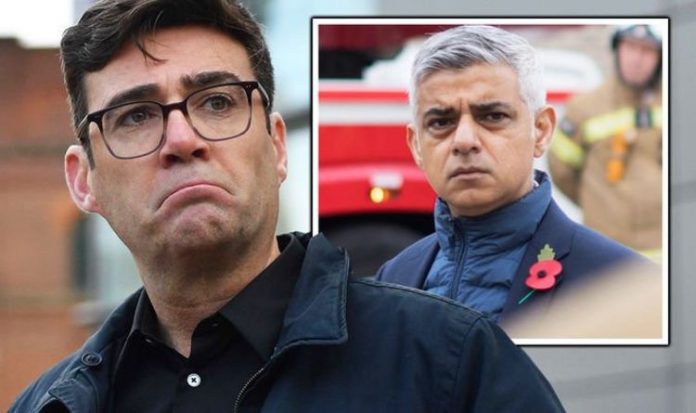 The Mayor of London has criticised leaders in other parts of the country and argued London has “too often become the scapegoat to many of Britain’s problems”.

Despite demanding more than £29billion and Transport for London receiving two bailouts during the coronavirus pandemic, Mr Khan claimed the capital was not getting any “special treatment”.

In a speech to the virtual Centre for London conference 2020, Mr Khan accused the government of undermining London to “shore up the vote in other parts of the country”.

He said: “It feels like London has too often become the scapegoat to many of Britain’s problems, but stoking populist division is a dangerous game”.

And, in a veiled swipe at leaders in the north, Mr Khan said: “At the moment, sometimes other parts of the country point the finger at London.

“But this unhappiness is misdirected, too often it’s not London but Whitehall and Westminster that’s the source of unhappiness.

“Our city should not be tarred with the failings of the national government’s simply because it’s based in SW1.

“Of course, I see how some decisions by this government can look London-centric and annoying colleagues in the north.

“But when cities and regions bicker, we fall into the government’s trap, because it’s in their interest that we’re pitted against one another, fighting a zero-sum game over money.”

Before the second national lockdown was announced on Saturday, areas in the north such as Liverpool, Greater Manchester and Sheffield had strict restrictions imposed.

Northern leaders expressed anger at the government, accusing them of failing to offer enough funding for businesses – and claimed they were only granted their demands when London fell into the same tier.

Greater Manchester Mayor Andy Burnham expressed disbelief at the news saying he could “barely believe” what he was reading.

It comes as Labour’s Steve Rotheram argued “the prime minister of this country believes the North is worth less than the South”.

Liverpool’s metro mayor added: “I can assure the government that the people of the North won’t easily forget that they were judged to be worth less than their southern counterparts.”

However, Mr Khan went on to claim areas in London are also regularly neglected by the government.

He added: “Instead of succumbing to the government’s divide and rule tactics, we need to rally together.

“The truth is, we have so much in common.

“I know that the people of Liverpool, Manchester and Sheffield sometimes feel remote from Whitehall – but so do the people of Lewisham, Mitcham and Southall.

“And take it from me from my position as Mayor of London, it certainly doesn’t feel like London is getting special treatment from this government – quite the opposite.”

Despite securing a £1.8billion financial package to bailout TfL over the weekend, Mr Khan claims the support for the London transport service can benefit northern cities.

He continued: “I believe this fight over TfL was a prime example of why we need to work together across cities and regions, because without a successful locally accountable TfL, there’ll be little future for transport for the North, transport for the West Midlands and so on.

“Unless we resist the temptation to turn on each other and instead, stick together and stand up for the funding and the powers that all mayors needs, we allow the government to dictate the terms.”

Mr Khan went on to claim a “new era of austerity” is being forced on London through cuts to budgets and public services – despite being a national issue.

He continued: “The London plan is being undermined.

“TfL is being squeezed, more and more national controls are being added to areas of devolved responsibility, like affordable housing and a new era of austerity has been forced on London with deep budget cuts facing the GLA and London counsel, as well as other public services.

“All of this is threatening the very institutions of local democracy.

“And by the way, none of this is about me, Andy Burnham or Steve Rotheram.

“It’s about standing up for the integrity of our institutions and the importance of devolution.”