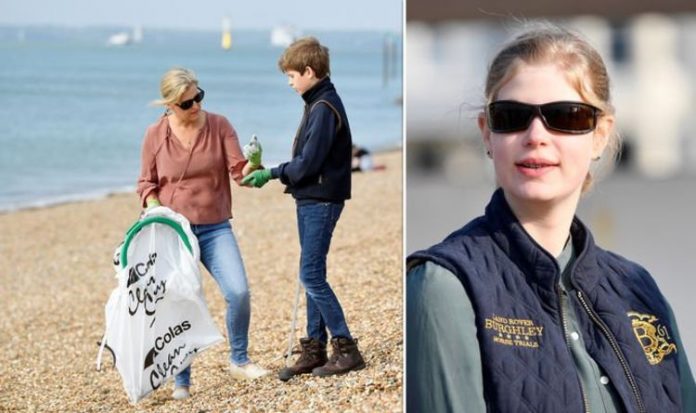 She added: “We aren’t being told what to do with them. Obviously we would want to encourage people to use these lovely reusable masks, but sometimes you can’t. It’s so difficult because councils are stretched at the moment.

“But if they were to make recycling units available for people to use. Medical facilities and the medical profession obviously know what to do with it, they will have recycling facilities.

“I don’t know whether they incinerate, I’m not sure….but we just don’t know what to do with them. In an ideal world we would all just use these lovely reusable ones.”

Louise, who joshed with her brother and spoke animatedly about starting A-Levels in English, history, politics, and drama, worried that much of the progress made in persuading people to use reusable plastic cups had been lost.

Sophie interjected: “They are always going ‘oh no mummy, not again!’ and off I go into the bushes to get something else.”

Edward, 56, and Sophie decided to take the children on the beach clean to help encourage them to volunteer.

It was good preparation for Louise, who is beginning her Duke of Edinburgh’s Gold Award and will need to do volunteering as part of it, an aide said.

Her first task, however, was to cope with tip-tapping from her mischievous brother, who immediately started prodding the back of her legs when they were both given grabbers for the litter pick.

The Marine Conservation Society is currently doing a beach clean around the UK coastline.

Kate Whitton, the society’s public liaison manager, said the variety of litter often depended on “footfall, the wind, the tide, the time of year, the weather and how many people are out”.

“We are keen to encourage community engagement, people to look after their litter as well as picking other people’s up,” she said.

She explained that there was a lot of wildlife in the Solent and around the beach, including seabirds, seals, dolphins further down the coast, molluscs, and crustaceans.

She said it had been difficult getting people out litter picking during Covid but the enthusiasm was out there.

Sergio Di Dino, from Southsea Beach Watch, said the Wessexes had picked up everything from fishing lines to bottle tops, straws, food wrappers, squid used as bait to catch dogfish and glass.

He said of the visit: “We are hugely grateful for this show of unity. It highlights the problems we are facing and how people of all kinds can play their part in protecting the local environment.”

Mr Di Dino acknowledged that face masks, especially where the strings are still attached, were becoming a problem for wildlife.

“It’s a very new problem due to the new normal,” he said. “What has happened since Covid is that all the progress made on limiting plastic seems to have been rescinded.

“We have seen an explosion of plastic.”