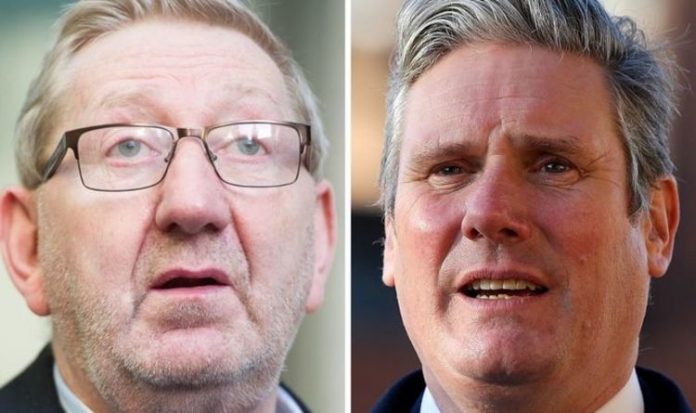 Sir Keir Starmer whipped his Labour MPs to back Prime Minister Boris Johnson’s Brexit deal yesterday. Dozens of backbenchers were outraged when Sir Keir pledged his party’s support for the Government. Of those who rebelled, 36 abstained from voting, while one MP, Bell Ribeiro-Addy, outright voted against the deal.

The majority of Labour MPs backed Remain in the 2016 vote with Sir Keir himself considered one of the key architects of a People’s Vote.

Most of the trade unions, like Len McCluskey’s Unite the Union, were similarly dead-set on remaining a part of the EU.

In October, Mr McCluskey withdrew ten percent of Unite’s funding to the party, around £150,000, and has since threatened that another cut in funding might happen should the party’s course change too drastically.

Len McCluskey: The trade union boss will support Starmer despite his misgivings, it has been claimed (Image: GETTY)

Despite this strongman rhetoric, Dr Jonathan Mellon, a senior politics researcher and co-director of the British Election Study at the University of Manchester, told Express.co.uk that Mr McCluskey and his allies will be forced to support Sir Keir as the only other option is a Tory Government.

Dr Mellon said: “I’m certainly not an expert on the funding modelling of political parties.

“I think in general the unions, of course, are not going to want another Tory term, regardless of who’s the head of Labour.

“If push comes to shove they would prefer to go and back Keir Starmer rather than implicitly back another five years of a Boris Johnson Government.

Jeremy Corbyn: The former Labour leader abstained from the vote despite having the whip removed (Image: GETTY)

“It’s hard to see the unions doing anything that really fundamentally commits to another Conservative Government given their general political preferences.”

Mr McCluskey has himself, albeit reluctantly, previously hinted that he believed Labour should back the Tories in a Brexit deal.

Earlier this month in a Times Radio interview, he called on Labour MPs to stop “sitting on the fence” over a deal.

He said: “Frankly, Labour needs to focus on the most important issue of the day, not to be seen to be sitting on the fence.

Socialism: Corbyn and McCluskey were close allies throughout the former’s leadership (Image: GETTY)

“The idea of an abstention, to me, would be completely wrong.

“I hope they learn the lesson from back in December that any confusion over this will be damaging to them.”

It is surprising, then, that some of Mr McCluskey’s most loyal allies opted to ignore him.

Among them, Mr Corbyn, whose leadership Mr McCluskey enjoyed renewed popularity under, abstained from the vote – although he currently has the whip suspended.

Brexit news: Starmer has flip-flopped on his Brexit policy since the 2016 vote (Image: Express Newspapers)

Sir Keir has since attempted to allay fears of Leave-voting Britons after he promised that Labour will make a “clean” from its divisions over Europe and will not seek major changes to the UK’s relationship with the EU,

This was after Mr Johnson accused him of secretly wanting to take the UK back into the EU should he win power in 2024.

Labour Party: Starmer has promised that Labour would never take the UK back into the EU (Image: GETTY)

Sir Keir told The Guardian: “I’m determined the next general election will be fought on our terms, not somebody else’s terms.

“We’ve left the EU and the Remain/Leave argument is over.

“Amongst the reasons for voting for the deal is to allow that closure.

“In our general election campaign in 2024, we will be a future-looking Labour party and a future Labour government, not one that looks behind us.”