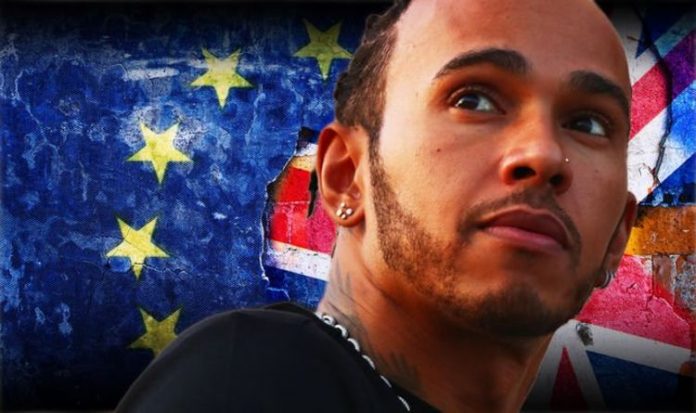 Mr Hamilton’s dominance on the track has spanned over a decade, seeing him become a seven-time world champion this season, matching legend of the sport Michael Schumacher. Prime Minister Boris Johnson has ensured that the Mercedes driver will receive a knighthood in the New Year’s honours list, marking a memorable year for Mr Hamilton. However, this comes after a warning that the threat of a no deal Brexit could have a huge impact on Mr Hamilton’s career. Chairman of Motorsport UK David Richards warned last year that a no deal Brexit could see Mercedes walk away from Formula One.

Mr Hamilton has been at the team since 2013, winning six of his seven world titles with the German manufacturer.

But, if Mr Richards warning is accurate, Mr Hamilton may be looking for a new home in Formula One in the near future.

He said: “Looking at the investment that Mercedes have in Brackley, and the infrastructure that is already in place there, could a no deal Brexit precipitate them stopping in Formula One?”

Mr Richards added that Brexit will “not make life easier” for teams based in the UK.

He added: “I have been surprised that the teams haven’t been overly-concerned about it.

“For some months now, Toto Wolff (Mercedes Team Principal) is the only person that has been very clear on the problems.

“If we get a no deal Brexit, the early part of the season is going to be very challenging for all the teams, and I don’t think some of them have fully considered that yet.”

Mr Wolff has previously described Brexit as the “nightmare scenario”.

He also said that the political changes about to come in place could hand Mercedes’ rivals Ferrari an advantage.

“The way we get parts and services is just in time, at the last minute into the UK and any major disruption in borders or with access would massively damage the Formula One industry in the UK.

“There is uncertainty at the moment whether the industry is going to be impacted by a no deal Brexit, or a Brexit that is damaging to what for me is one of the outstanding industries in the UK. We have said before, the mother of all messes.”

Ferrari are based in Italy, and their sister team Alfa Romeo (previously named Sauber) are based in Switzerland.

Meanwhile, Mercedes, Williams and McLaren are among teams based in the UK

Mr Wolff added: “Ferrari in Italy, Sauber in Switzerland, they would have a massive advantage over every UK-based team.”

Mr Hamilton for now remains dominant in the Mercedes car, leading to praise from Lord Peter Hain for his achievements on and off the track.

He told Express.co.uk this year: “What you cannot take away from his is his fundamental decency and his extraordinary and unique ability.

“Nobody said Bradley Wiggins was peerless, he was the top. Lewis Hamilton is right above anybody in one of the most difficult sports to master.”