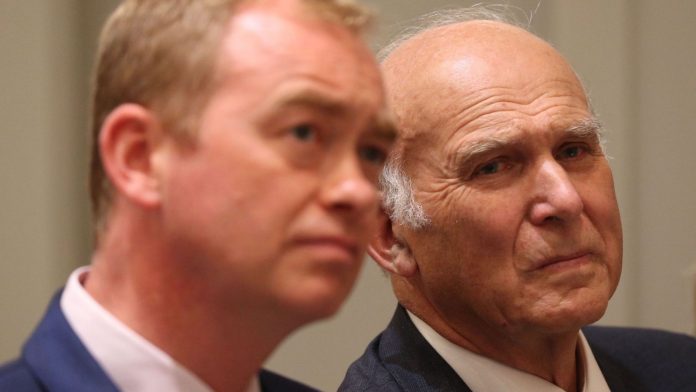 Both Sir Vince’s call for a “movement for moderates” and Mr Farron’s theological beliefs on gay sex were attacked – through lyrics – as party members gathered for their renonwned “Glee Club”.

Mr Farron, the Westmorland and Lonsdale MP who led the Lib Dems between 2015 to 2017, was the first to come under fire in a series of new songs penned for the annual event.

In a packed room in Brighton, conference attendees sung about the protracted row over Mr Farron’s views on gay sex, which dogged the party at last year’s general election.

To the tune of “It’s a Sin” by the Pet Shop Boys, delegates chorused: “When I go back upon Newsnight; You know it’s going to cause you pain; I’m speaking on gay sex again.

“For every single interview; No matter when or where or who; Has gay sex in common too.

Since standing down as Lib Dem leader last year, Mr Farron – a committed Christian – has said he regrets eventually saying he does not believe gay sex was a sin.

It followed weeks of him being asked the question in the weeks before the 2017 election.

In other new lyrics sung by Lib Dem members on Monday night, Sir Vince’s call for the party to become a “movement for moderates” was also mocked.

To the tune of military march “Men of Harlech”, the gathering sung: “Men and moderates whose inaction; Kept in power the Tory faction; Drove supporters to distraction; Sitting on the fence.

“Follow still the Vince who leads us; (Soggy but not into Jesus); His reforms they do not please us; Making zero sense.

Other songs sung included a variation of football anthem “Three Lions”, instead using the words “gold Stars on my flag” in tribute to the EU.

“Losing deposits” and “12 days of coalition” were also among the regular ditties.

Ex-MP and former Lib Dem deputy leader Sir Simon Hughes was spotted enjoying the singsong on the last night of the party’s conference.

The party’s Glee Club has been criticised by alcohol charities in previous years for a song featuring lyrics about late leader Charles Kennedy’s alcohol addiction.

As well as making a direct appeal to the prime minister over Brexit, the Lib Dem leader is also expected to speak about his proposals to allow a new class of supporters to join the party for free and allowing non-MPs to stand for leader.

Sir Vince attempted to ease concerns of existing members about entryism into the party during a private event at the weekend.