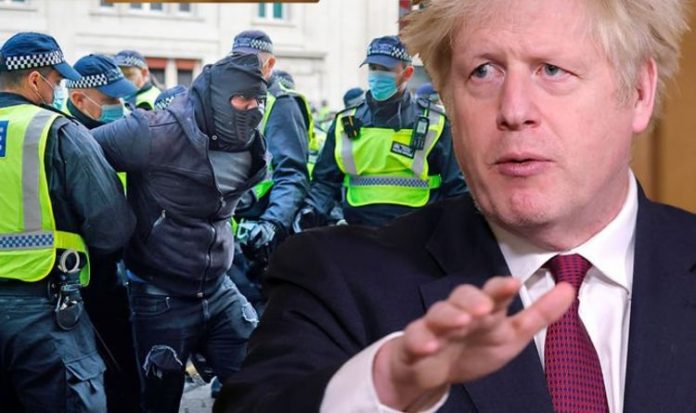 Boris Johnson yesterday said he was “bitterly disappointed” to axe festivities and create a tough new Tier 4 area for most of the south east of England. No one in those areas can visit other households to celebrate, essentially wrecking Christmas for more than 16 million people. The rest of Britain will see their relaxed indoor mixing rules cut from a proposed five days down to just Christmas Day.

The Prime Minister said he had to act after the new strain of the virus, which first emerged in Kent in September, took hold and was proving to be up to 70 per cent more infectious.

Just last week, Mr Johnson had refused to alter plans for five days of household mixing, saying: “I don’t want to ban or cancel Christmas. I think, frankly, that would be inhuman.”

Mr Johnson said: “We cannot continue with Christmas as planned. Christmas will be different but we must be realistic.

“As sure as night follows day we will beat back this virus and reclaim our lives.

“We are sacrificing the chance of seeing our loved ones this Christmas so we have a better chance to see them for future Christmases.

“When the virus changes its method of attack, we have to change our method of defence.”

According to scientists, the

new variant has increased infections by 70 per cent and was responsible for the rate continuing to rise in Kent during the second lockdown. Professor Whitty said that it was in two other countries but most prevalent in Britain and that he had reported it officially to the World Health Organisation.

He admitted that “this is a bad moment” but “it is not the worst moment”.

And he said that the “light at the end of the tunnel” – with the vaccine being rolled out along with better treatments – means “this is not the worst moment in this pandemic”. The new rules will mean that, as of today, a stay-at-home order will be imposed in London, Kent, most of Essex and Surrey and large parts of Hampshire, with only essential shops being allowed to open.

This crackdown will affect

Nobody in Tier 4 areas can get together with other households to celebrate Christmas, while those in tiers 1 to 3 will only be able to do it on Christmas Day instead of the five days originally promised.

The PM’s announcement was quickly followed by one from Welsh First Minister Mark Drakeford, who said he would put the whole of Wales in Tier 4.

However, he has allowed people to meet up in two household ­bubbles on Christmas Day.

In Scotland, First Minister Nicola Sturgeon will put the country into level four restrictions from Boxing Day. Planned relaxation of the measures has been cut to Christmas Day alone.

Ms Sturgeon insisted that the decision had made her “want to cry” but said this was the most dangerous moment.

The decision by Mr Johnson and his team of experts has been met with dismay by many Tory MPs.

They privately believe that a decision to cancel Christmas was delayed until after MPs were no longer sitting in the Commons,

so they would be unable to scrutinise the decision. A review of the new tiers will take place on December 30 but government sources have hinted that they are expected to continue.

It is believed that the Prime Minister is still determined that pupils in Tier 4 areas return to schools next month.

Mr Johnson knows that he is facing an increasing chance of a rebellion on his backbenches.

He was saved in the vote on the tier system earlier this month because Labour chose to abstain and ministers had promised to take many constituencies in Tier 3 and put them in Tier 2 at the first review.

Despite this, the Government still had more than 50 Conservative MPs rebel.

The chairman of the Covid Research Group, MP Mark Harper, voiced the opinions of many colleagues when he warned lockdowns and tiers “have failed”.

Reacting to yesterday’s ann­­ouncement, he said: “This is a very sad day. Lockdowns and increasingly severe tiered restrictions have failed in their goal of slowing the transmission of Covid.

“And now the Government is expecting people to sacrifice the chance to share Christmas with family, friends and loved ones –just a few days after promising

“If the Government wants the support of the public and Parliament, it must publish a clear exit strategy from this night­marish cycle of damaging lockdowns and restrictions.

“As we deliver the vaccine to the most at-risk groups around the country, the public needs to see how this will translate into a return to normal life, with restrictions being lifted at every stage, and a clear road map to all our freedoms being restored.

“More immediately, given the tier system and Christmas household rules were expressly authorised by the Commons, these changes must also be put to a vote in the Commons, even if that means a recall of the House.”

Even President Donald Trump responded to yesterday’s ann­­ouncement, tweeting: “We don’t want to have lockdowns. The cure cannot be worse than the problem itself!”

day Express has learned that the PM was texting Tory MPs last week to apologise when their constituencies were mostly kept in Tier 3.

North West Leicestershire MP Andrew Bridgen, who rebelled, said: “I was promised my constituency would go into Tier 2 and I didn’t believe them. Too many of my colleagues did believe them.

“My constituency is still in Tier 3 but the neighbouring Rutland, with a higher infection rate, is in Tier 2. There’s no logic.”

Meanwhile, retailers said last night they are “staring into the abyss” after the imposition of new rules the week before Christmas.

Business bosses criticised the decision and suggested that ­“thousands” of jobs could be lost due to the measures.