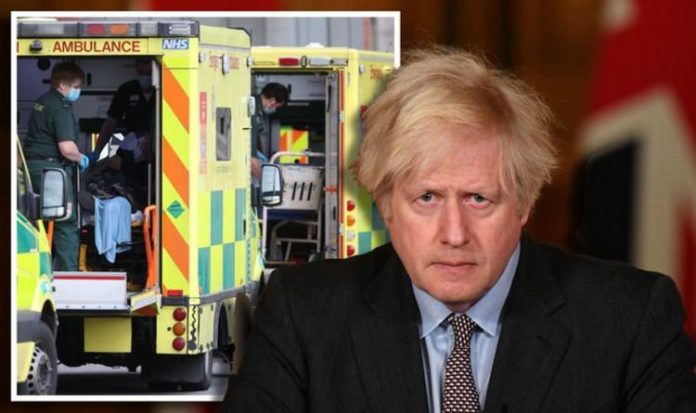 The coronavirus pandemic hit a grim milestone in the UK today, with a recorded 100,000 deaths from the virus since it reached the country. Speaking from Downing Street this afternoon, Prime Minister Boris Johnson gave his condolences to those who had lost loved ones, saying of the more than 100,000 deaths: “it is hard to compute the sorrow contained in that grim statistic.”

England is currently in its third lockdown in less than a year, with Britons told to stay home and schools and non essential businesses closed.

Cases have soared in recent months, with Sir Simon Stevens, chief executive of NHS England, saying today the country had seen coronavirus cases “rippling up” through the country.

Sir Simon said on Christmas Day the health service had 18,000 Covid-19 positive patients and now there were just under 33,000.

He added: “We’ve seen that growth rippling up from the south-east, London to the East of England, and then up to the Midlands, which is consistent with the spread of the new variant of the virus.”

The next review of lockdown conditions in England is due to take place on Monday, February 15.

“That is a question that will be driven by the science.”

However, it was not clear whether a new tiered system would be implemented, or the previous method would be used again.

Previously areas across the UK were placed into one of four tiers, depending on the severity of the cases and number of hospitalizations.

One reason cases have soared in recent weeks is due to the new variants of coronavirus spreading worldwide.

Speaking from Downing Street on Tuesday, England’s Chief Medical Officer Professor Chris Whitty said the problems of the new variant had made things “very different” this year, adding this was not predictable in September.

He said: “We were worried two weeks that the measures we had at the moment were not enough to hold this new variant.”

He said data showed “the rates are just about holding with the new variant with what everybody’s doing”.

With the news of new variants developing around the world, some have called for the tightening of rules around travellers entering the UK.

One such measure being debated is quarantine hotels, which would see travellers contained for a minimum of 10 days before entering the country subject to negative coronavirus tests.