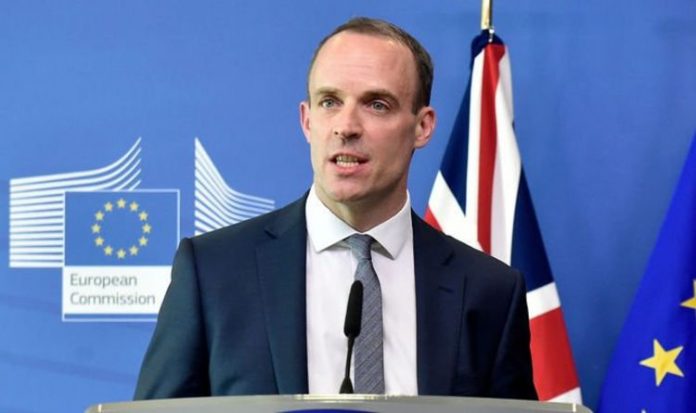 This week, Prime Minister Boris Johnson imposed a new lockdown after cases of the deadly coronavirus continue to rise across the country. It is expected to be in place until at least December 2.

But with the furlough scheme extended until March, many have raised concerns lockdown could be extended as well.

However, Foreign Secretary Dominic Raab has insisted the new restrictions will come to an end in December but admitted “mistakes” have been made.

Instead of extending lockdown, Mr Raab said the Government is planning to revert back to the three-tier system which was imposed on regions like Liverpool and Manchester.

Speaking to Sky News today, Mr Raab said: “We want to get through to December 2, and at that point we will transition back to localised approach, which was always our preference.”

Mr Raab – who has been forced to self-isolate after coming into contact with someone who tested positive for the virus – wanted there will be much work to do to force the R rate back down.

This comes after SAGE documents claimed those who spend the festive season with their families from different households may have to quarantine in late December and January.

A new report from the Government’s scientific advisers urges more advice to be given to the public on how to manage their risk during the festive season.

The report said: “After a period of high exposure to multiple contacts of different networks – eg a social gathering – the risk of spreading infection to other people can be reduced by avoiding contact as far as possible for two weeks.”

As MPs voted in favour of imposing the new restrictions, coronavirus statistics used to justify the lockdown were quietly amended, drastically lowering the number of anticipated daily deaths.

Graphics revealed during last weeks Downing Street press conference suggested the UK would see up to 1,500 deaths a day by early December.

This was far higher than the numbers seen during the first outbreak of the deadly virus back in Spring.

However, Government documents found the figures were far too high and were “amended after an error was found”.

The forecast predicted around 1,000 deaths per day by December 8 – a figure on par with that in April.

This came after a separate model showed a worst-case scenario of 4,000 deaths a day by the end of December.

The terrifying figure was based on out-of-date data which has also been updated.