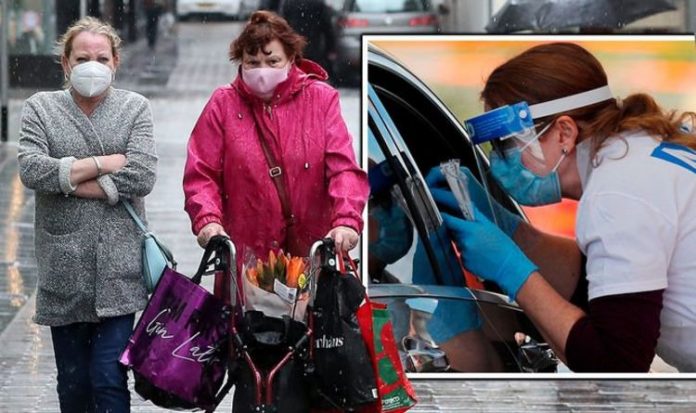 Prime Minister Boris Johnson announced the new Covid Winter Plan on Monday as he addressed Parliament via video call. The full list was released on a Government website on Thursday morning ahead of the announcement to Parliament by Health Secretary Matt Hancock. The new tier system is tougher than the last one after public health officials warned it wasn’t working as well as it should be.

Prime Minister Boris Johnson warned restrictions in many areas would be more stringent.

Mr Johnson told the Commons: “I’m sorry to say that we expect more regions will fall, at least temporarily, into higher levels than before.

“But, by using these tougher tiers and by using rapid turnaround tests on an ever greater scale to drive [the R number] below one and keep it there, it should be possible for areas to move down the tiering scale.”

The Prime Minister said England would be facing the tiered system until the end of March.

READ MORE: What are the new covid rules?

Social distancing and the rule of six will apply in all three tiers, just as before.

He added: “From next Wednesday people will be able to leave their home for any purpose and meet others in outdoor public spaces, subject to the rule of six.

“Collective worship, weddings and outdoor sports can resume, and shops, personal care, gyms and the wider leisure sector can reopen.

“But without sensible precautions, we would risk the virus escalating into a winter or New Year surge.”

In a statement, the Cabinet Office said leaders of devolved administrations in England, Wales, Scotland and Northern Ireland had “endorsed a shared objective of facilitating some limited additional household bubbling for a small number of days”.

However, they also stressed the public “will be advised to remain cautious, and that wherever possible people should avoid travelling and minimise social contact”.

Northern Ireland is discussing a cross-border agreement with Ireland, which means the same rules are likely to apply in every corner of Britain.

The four-nation approach, which needs approval from Parliament and the devolved administrations, means families who have relatives in another part of the country can still plan Christmas together.