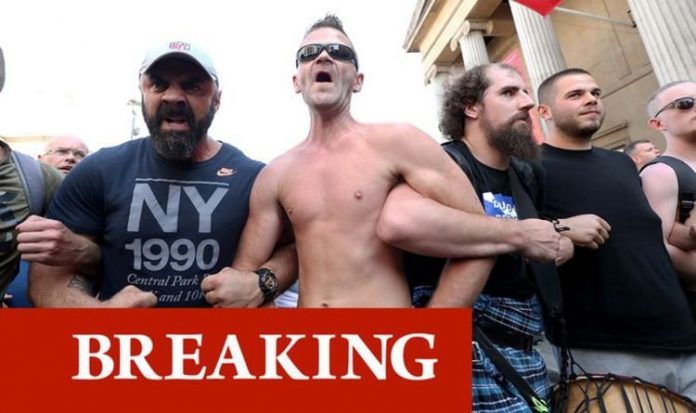 Scuffles have broken out between demonstrators and police at a rally in Trafalgar Square organised by opponents of coronavirus lockdown measures. Metropolitan Police officers moved in on the protesters as they congregated near Nelson’s column on Saturday. The protesters formed human blockades opposite the officers to stop them from making arrests.

One supporter of the protests tweeted: “Only 500 expected at today’s anti-lockdown protest in Trafalgar Square, London, one or two more!

This was a reference to the fact today’s protests have seen a very large turnout.

Police have yet to disperse the crowd that is significantly breaking the ‘rule of six’.

Boris Johnson introduced the ‘rule of six’ on Monday, restricting crowds to six people or less.

One twitter user described the scenes of protesters squaring up against mounted police.

They tweeted: “Riot police go in at Trafalgar Square protest, police telling everyone to move back.”