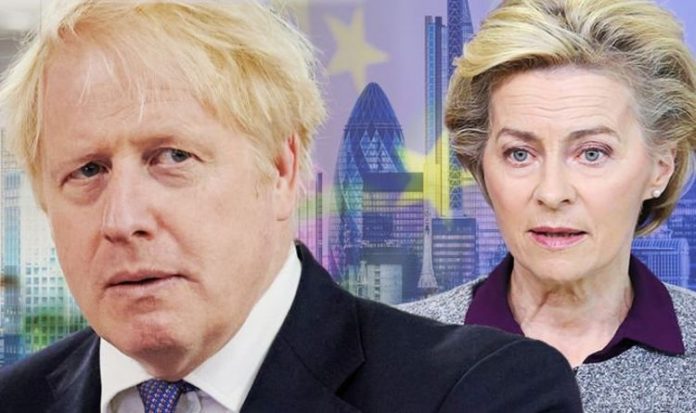 Brexit has sparked debate surrounding the future of the City of London in recent months as the EU and UK clash over financial services. Some were concerned when Amsterdam overtook London as Europe’s biggest trading centre earlier this month. On top of this, in January around £5billion of EU share trading left London for other European capitals. Mayor of London Sadiq Khan has today published an analysis of the Government’s Brexit trade deal from a London perspective by the Centre for Economics and Business Research (CEBR).

He said: “Whichever way you slice it, the Government’s Brexit trade deal was the equivalent of a ‘no deal’ Brexit for financial and professional services, and our businesses now face a costly red tape mountain caused by the UK having to trade with the EU as a ‘third country.’”

However, others have claimed that Brexit may actually be beneficial for the City.

Barclays CEO Jes Staley said the UK’s departure from the EU will prove to be a net benefit for the City of London.

“There are some jobs that are going to Europe that otherwise would have been in the UK, but it’s in the hundreds.

“Some amount of capital has moved but London is still obviously the main centre for Barclays.”

Bloomberg commentator and former chief markets strategist at Haitong Securities in London, Marcus Ashworth, claimed in October that hedge-funds and bankers will still gravitate towards London.

He said that it makes more sense for financiers to have a “one-stop shop” in London rather than various hubs in Paris, Frankfurt and Amsterdam.

Mr Ashworth added: “As such, it will be difficult to wrestle trading flows, bankers and — ultimately — control of the EU’s own markets away from London.

“Brussels is concerned that three-quarters of euro-denominated derivatives are traded and cleared in London, along with nearly half of euro currency trading.

“That’s understandable. But for Europe to create its own self-sustaining market, it needs to think about what clients — such as London’s prized ecosystem of hedge funds — want rather than obsessing about market infrastructure or where investment banks are opening subsidiary offices. In short, it needs to follow the money.”

Mr Ashworth concluded that clients in Europe are “attached” to the UK because of its trading advantages.

Yesterday, financial consultancy Bovill claimed that about 1,000 EU finance firms are eyeing up opening offices in the UK for the first time.

A Freedom of Information (FOI) request by the firm found that 1,500 money managers, payment firms and insurers have applied for permission to continue operating in the UK after Brexit.

Mike Johnson, managing consultant at Bovill, said: “Many of these European firms will be opening offices for the first time, which is good news for UK professional advice firms across multiple industries including lawyers, accountants, consultants and recruiters.”