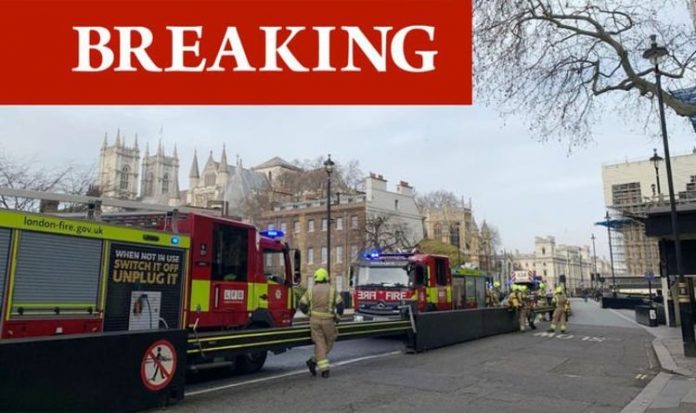 In pictures on social media, smoke can be seen rising from the Commons as emergency crews arrive at the scene. There were no reports of damage or injuries at the scene. Commenting on the blaze, one person said: “Worrying scenes as smoke rises from the Palace of Westminster.

“No further information on the incident but LFB don’t seem overly concerned.

“Hopefully nothing to worry about.”

Due to the Christmas recess, there are currently no MPs within the House of Commons.

However, they will be recalled on Wednesday to vote on the UK’s Brexit deal with the EU.

In an official statement, the fire brigade confirmed there had been no fire today.

Instead, they revealed it had been smoke caused by a generator.

They said: “Firefighters were called to reports of smoke coming from some flats on Parliament Square in Westminster this morning.

“The smoke was caused by a generator starting up.”

Support from other areas in the south has been used in order to help cope with the increased number of calls.

She said: “We’re seeing a real rise in the pressure for hospital services, but also other types of NHS services as well ambulance trusts in particular are coming under extreme pressure, as are community and mental health services.

“We’re seeing real pressure particularly in London and the South, and that comes from this added demand, but also staff absence.

“It’s localised at the moment, but we could see that growing, and I think it’s really important to remember that what’s going on in the community is also going on in healthcare settings.”