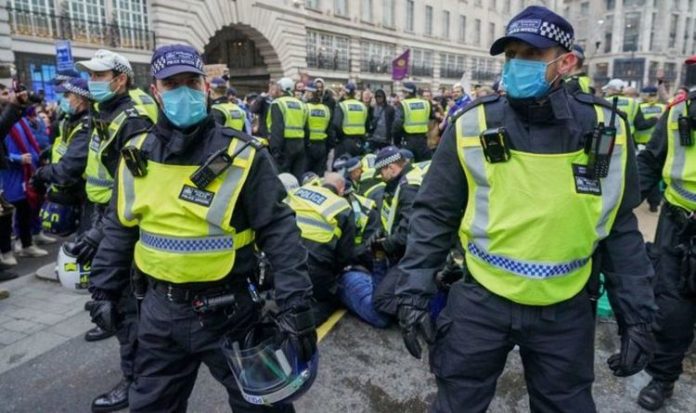 Hundreds of demonstrators descended on Central London on Saturday afternoon, chanting “freedom” and leaving bystanders in utter disbelief. Protesters, many of whom weren’t wearing masks, brandished signs reading “All I want for Christmas is my freedom back”, “Ditch the face masks” and “Stop controlling us”. The activists marched from Hyde Park to Oxford Circus and Regent Street before they clashed with helmeted police who arrived in several vans and ran to respond to the large crowds.

The Metropolitan Police said hundreds of officers made “early interventions” to stop people gathering and urging them to go home.

People who did not turn back were either arrested or issued with fixed penalty notices.

During the protests, officers were seen grappling with people in the ground in an attempt to detain them, with onlookers jeering and filming the chaotic scenes on their mobile phones.

Green smoke was even released at one point as protesters began to be surrounded by police at the top of Carnaby Street.

London lockdown protest: Britons are furious after chaos erupted on the streets of the capital (Image: GETTY)

Britons reacted with fury to the horrific scenes, branding the protesters “cowards” and describing their actions as “absolutely disgusting”.

One person reacting to the original story on Facebook wrote: “They are simply pond life cowards. Throwing bottles at the police should not be acceptable.

“They would not have the guts to do it if they wasn’t in the crowd.”

“If they put the same effort into abiding by the rules, there would probably be no rules to rage against now, but I’m sure they’d something equally stupid to protest about.”

A third person said: “What’s the matter with these people? Just glad they aren’t my neighbours.

“It’s people like that spread discontent and spread the problem.

“Most people staying safe and away from them.

DON’T MISS
Boris Johnson urged to SCRAP tier system in England – ‘Doesn’t work!’ [POLL]
Lockdown postcode checker: What tier am I in? How can I check? [EXPLAINER]
What time does lockdown end on December 2? [ANALYSIS]

London lockdown protes: More than 150 arrests were made by officers (Image: GETTY)

“Glad they won’t be at my table for Christmas.”

A fourth reader even suggested London should be moved up from Tier 2 to Tier 3 – the most severe alert level in the Government’s updated lockdown restrictions – “to save them from themselves”.

They wrote: “Given how severe COVID can be, it is very sad that so many people are protesting because the Government are trying to prevent them catching it.

“So hard to think that these protesters want the right to mingle and then, armed by the virus, attempt to commit murder and suicide in the name of freedom.

“Really think London should be in Tier 3 to save them from themselves.”

Chief Superintendent Stuart Bell, the policing commander for this event, said it had been a “challenging day”, urging anyone who has not already dispersed to now return home.

He said: “This was a challenging day for Met, City of London and British Transport Police officers and I would like to thank them for the professionalism they have shown throughout the day.

“On Friday, we made it very clear how we would police this event, warning those looking to attend that they risked facing enforcement action if they attended a gathering in London.

“Today’s enforcement action is a direct result of those individuals deliberately breaking the law and at times, targeting our officers with aggression and causing disruption to the road network.

“Our policing plan will continue well into the evening and I would urge anyone who hasn’t already dispersed to go home. By doing so, you can avoid ending up facing enforcement action and help protect yourself and others during this health crisis.”

Home Secretary Priti Patel had earlier said: “We’ve seen our police officers yet again do incredible work to ensure that they help to stop the spread of this awful virus.

“The people that are protesting today have been protesting for many months, and we’ve seen this over successive weekends.

“We ask everybody to be conscientious – we all know the regulations and the guidance, we have brought these measures in to save lives and to prevent preventable deaths.”