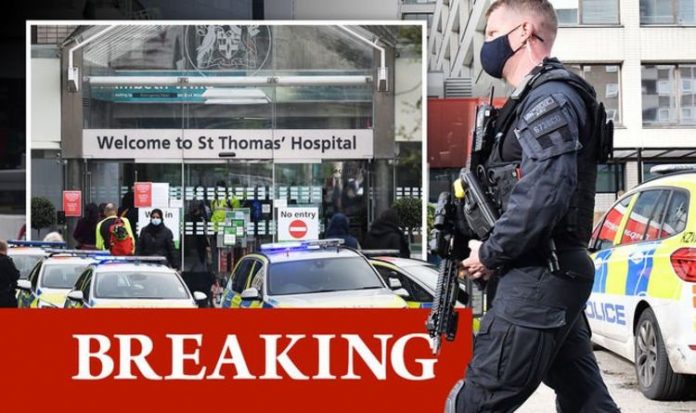 Half a dozen police cars and several armed police officers surround the hospital, located near Waterloo, according to people at the scene. Eyewitnesses say patients, nurses and doctors are being blocked from entering the building, as police clear the area.

Lambeth Police have commented on the incident, and said in a statement: “Police are dealing with a security alert at St Thomas’ Hospital, SE1. We will provide further info when known.”

Westminster Bridge is closed in both directions to traffic, while a huge cordon has been put in place around the area.

Patients arriving for appointments have been turned away from the hospital, while staff have also been blocked from entering.

One person, who is at the scene, wrote on Twitter: “St Thomas’ hospital with armed police attending. No entry to anyone.

“Now clearing the grounds in front – everyone pushed back out to Westminster bridge.

“And now a further pull-back – people pushed down toward park plaza hotel off the bridge.

Dozens of people took to Twitter to ask why the hospital has been closed off.

Just after 10.30am, the Met Police said the security alert was being stood down and the cordons would be removed.

A spokesperson said: “The security alert at St Thomas’ Hospital is being stood down.

“We are in the process of removing cordons.”

A more detailed statment, given at 11.12am, stated: “Police were called at 09:18hrs to St Thomas’ Hospital SE1 following a report of threats made by a male. No weapons were seen. Armed officers attended. Local road closures were put in place. The hospital was not evacuated.

“Officers subsequently located and spoke to a male inside the hospital. The incident was stood down at approximately 10:30hrs. There have been no arrests. This was not treated as a terrorism incident.”