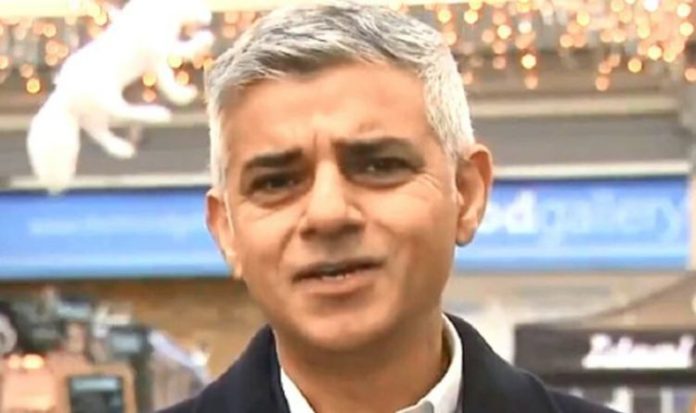 A spokesman for the London mayor warned of a “devastating” surge in cases this winter if people fail to follow existing Tier 2 coronavirus measures, with new data indicating the rate of new COVID-19 case was going up in 24 of London’s 32 boroughs for the seven days leading up to December 3. The assessment came the day after Mr Khan himself said Tier 3 measures would be “catastrophic” for London’s economy – but his words prompted many to accuse him of a lack of awareness about the situation in the rest of the UK.

Twitter user Sean Dennis commented: “So it’s ok for the rest of the country to be in tier 3 and businesses go bust but not London.”

Ian James added: “We couldn’t care any less. Where I live has a lower infection rate than London. Yet I’m in tier 3.”

Referring to widely circulated pictures of huge crowds of shoppers in central London, Simon Ward said: “Clearly nothing outside the M25 matters.

“If London goes into tier 3 it’s catastrophic. “What about the rest of the country who are in tier 3, sod them!!!!

“From the images this weekend on Oxford Street/Harrods, it ought to be in Tier 3 straight away.”

Jackie Woolley asked: “What about the businesses in the Midlands and the North that have gone bust, is that not catastrophic?

“No…. OK thought not because it isn’t the Capital.

Large numbers of people have been heading to central London (Image: GETTY)

Businesses are unfortunately going bust everywhere. London is not an exception!

Jan North said: “If you don’t go into tier 3 at the next review then something is going on!

“Especially after this weekend’s pictures! Businesses are unfortunately going bust everywhere. London is not an exception!

“Remember we are ALL in this together wherever we live!”

In a similar vein, another Twitter user added: “What about the North? The typical attitude of the metropolitan elite who think everything revolves around London.

Simon Ward said London should be in Tier 3 (Image: Twitter)

“What about those businesses struggling who are actually in areas that have lower infection rates than London but are in Tier 3? This stinks!”

Meanwhile, Sean Ward, who tweeted pictures of crowds of shoppers, aimed his comments at Prime Minister Boris Johnson, who is MP for Uxbridge and South Ruislip, rather than Mr Khan.

He said: “@Harrods at the weekend, @BorisJohnson yet up north in Newcastle with fewer cases and a lower R rate you put us in tier 3?

“Can’t upset them down south Boris! You couldn’t run a bath never mind a country. #northsouthdivide.”

The latest figures show that Havering in east London has the highest coronavirus rate in the capital, with 898 new cases recorded in the seven days to December 3 – equating to 346 cases per 100,000 people.

Government officials will review England’s tiered restrictions on December 16, at which point they could opt to move London into Tier 3.

Speaking on Sky News yesterday, Labour Mayor Mr Khan said: “It is really important that we don’t inadvertently act in away that leads to a surge in this virus.

“If London was to go into Tier 3, it would be catastrophic to those industries which are already really crippled under the COVID pandemic.

“That could mean many shops going bust, many bars, pubs and restaurants going bust and we are keen to make sure we stay in Tier 2.

“Tier 2 as well has got many challenges for us but it is really important that Londoners continue to make the sacrifices they have done.

“Nobody wants London to go into Tier 3 or even the country to go into a further third national lockdown.”