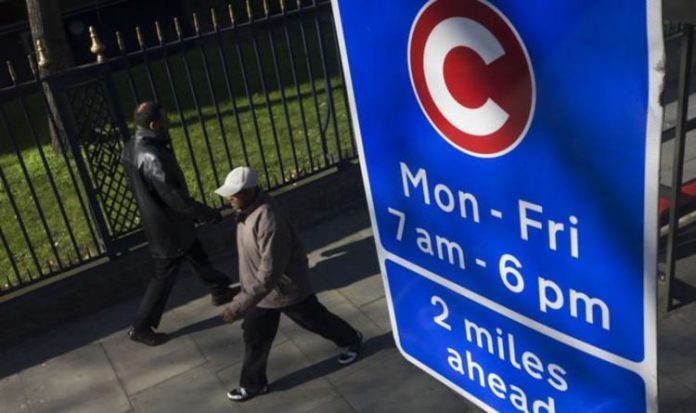 During the coronavirus pandemic, the vital transport system in the city saw revenues drop by 95 percent as people remained at home. But now Londoners face a crisis as the congestion charge could be extended to the north and south circulars.

This expansion would cover four million more Londoners and some motorist could be charged twice if they travel through the Ultra Low Emissions Zone.

Back in May, London Mayor Sadiq Khan accepted a £1.6billion TfL funding agreement with the Government, which came with the condition to hike up the congestion charge.

He called the cash boost “sticking plaster” and demanded a £5.7billion long-term solution for the next 18 months.

However, Prime Minister Boris Johnson lashed out at Mr Khan claiming he had “effectively bankrupted” TfL before the pandemic outbreak.

Speaking in the House of Commons yesterday, Mr Johnson said: “The current Mayor of London had effectively bankrupted TfL before coronavirus had even hit and left a massive black hole in its finances.

“Any expansion of the congestion charge or any other measure taken to improve the finances of TfL are entirely the responsibility of the bankrupt current Labour Mayor of London.”

Mr Khan hit back at the Prime Minister and former Mayor of London claiming he was “fixing” Mr Johnson’s mess.

“We requested an 18-month support package to see TfL through the immediate crisis and the aftermath, as it is uncertain how quickly fare revenue will recover.”

He said: “I said back in May the deal we had for six months will be a sticking plaster, we need a sustainable deal.

“For the foreseeable future, there will not be five million journeys on our tubes, five-and-a-half million on our buses.

“The facts are that the Government gave the privatised rail operators 18 months funding with no strings attached, but is saying to TfL we’ll give you a six-month deal with strings attached.”

He said: “It’s extremely worrying that despite repeated requests, the Government is offering only a papering-over-the-cracks funding package for Transport for London, with such punitive conditions.”

Peter Kavanagh, trade union Unite’s regional secretary for London, added the government is “punishing” the poorest Londoners in wake of the pandemic.

He said: “Londoners, who are already struggling financially as a result of losing their jobs or coping with reduced earning, are the ones who will be least able to afford the increases in fares, charges and council tax.”