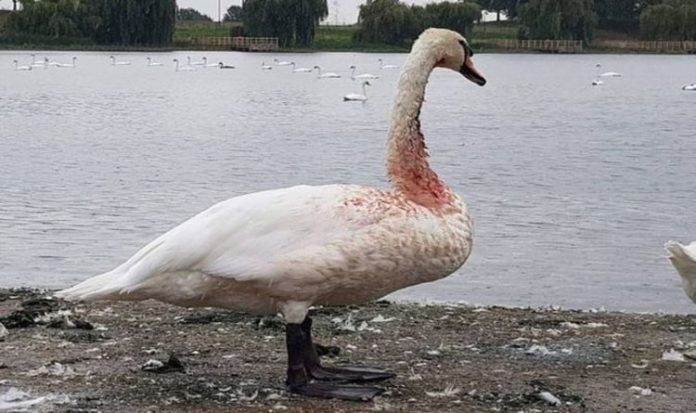 Greenwich Police found the swan with horrific injuries after being blasted with an air rifle at Southmere Lake near Thamesmead. Shocking pictures released by the force show blood pouring out the right side of its neck. The despicable incident took place at the London park on Wednesday, August 19.

To this day most swans are owned by the Queen but all wild birds are protected by law.

The police have urged anyone with information to come forward.

“All wild birds are protected from killing/injury/taking and police are appealing for information to identify the person responsible.”

A dedicated patrol team in southeast London shared some of the horrific images on social media on Wednesday.

In a post on Facebook, the wildlife protection group called Swan Patrol Team SE28, said the poor animal had been shot with a .22 calibre air gun and had been taken to the swan sanctuary for treatment.

They wrote: “Some terrible news today early hours of this morning possibly someone thought it was fun to shoot a female pen in the side of her neck with a .22 calibre air gun.

“She has been taken away to the swan sanctuary police have been notified and attended the scene.

“Awaiting news of her situation from the swan sanctuary updates will be posted.

“We are truly devastated by this evil barbaric act of cruelty that has been carried out on this defenceless creature words fail me on this.”

Several users condemned the incident on the site, one commented: “Bless her poor little soul, I cannot fathom how anyone could be so callous. Hope she makes a swift recovery.”

In the role, the Swan Marker also oversees an annual event on the River Thames and rounds up all mute swans to monitor its population.

Anyone with information on the incident in Southmere Lake should call police on 101 quoting crime reference number 3911330/20.