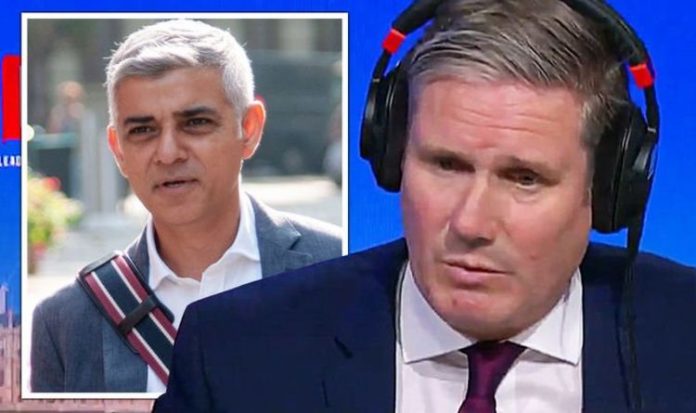 LBC caller Kate from Barnes in London claimed that there had been more support for the Labour Party since Sir Keir Starmer became leader. However, she noted that it was clear to see the incompetence from the party and Sadiq Khan over certain travel issues. The iconic Hammersmith Bridge has been shut down for the past 18 months and caused distress to locals in that time. Boris Johnson’s Government has now taken over from Sadiq Khan to resolve this issue, resulting in ridicule for the London Mayor.

While speaking to LBC, Sir Keir was asked what he and his party planned to do about the closure of Hammersmith Bridge that was causing major disruption.

LBC caller Katie said: “I am calling about Hammersmith Bridge.

“A lot of people in our community are really praising Labour now that you are in charge.

“But we have seen the utter incompetence and indifference of Labour-led Hammersmith and Fulham council.

“Also incompetence and indifference regarding TfL, led by mayor Sadiq Khan, when it comes to Hammersmith Bridge.

“Just to close, what West London communities badly need is a temporary bridge.

“We need a temporary bridge in days or weeks, it is urgent and we can’t wait any longer.”

Sir Keir admitted that he was not aware of all of the details of the issue but vowed to get up to date to ensure the issue could be resolved.

“As a result of you calling and asking me about this, I will make sure I am across it and talk to the relevant people and see if we can’t move this on.

“I looked a bit at it over the weekend and I think there are structural issues to do with the weather.”

A spokesman for Mayor of London Sadiq Khan rebuked the criticism over the bridge, but agreed it was right that ministers had stepped in to bail out the bridge repairs.

A spokesman said: “The Mayor and Transport for London will continue working closely with the bridge owners Hammersmith and Fulham Council and the Government to find an urgent solution, but it’s time for ministers to put their money where their mouth is.”