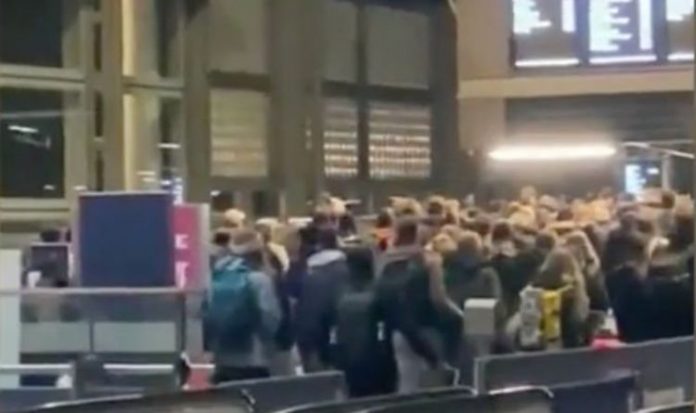 As of midnight tonight, the capital and other parts of the south east and east of England see the harsh restrictions imposed. People living in Tier 4 will be banned from leaving the city. But before the law is imposed across the capital, thousands of people have already flocked to train stations to get out of the city.

The chief medical officer for England said: “My short answer would be, please unpack it at this stage.

“The reason for that is if you look at the South East, if you look at the East of England and look at London, there has been a really dramatic increase in the proportion of the cases that we se when wee do the screening tests, which are not absolutely exact but pretty accurate, which would imply that in the South East, 43 percent of the virus is now this new variant.

“The numbers may vary slightly but those are broadly right.

“And those have gone up very very fast, over the last few weeks.

“So this has really gone incredibly quickly.

If someone is found to be breaking the new rules, the police can now fine them and even arrest them if they think it is proportionate and necessary.

The Prime Minister said: “I think the police have done an amazing job of enforcement – light touch enforcement – they have handled out lots of fixed penalty notices for breaches of the rules.

“They have also helped people keep overwhelmingly in line with what they ned to do – I really thank the police men and women up and down the country for what they are doing and they’ll continue to do it in the same way throughout this period.

“Above all, I’m sure people will naturally want to do it themselves as they have done throughout this crisis.

“The bulk of the population take this incredibly seriously and get it right and they will continue to do so.”

The new measures come as Mr Johnson cancelled Christmas due to the rising number of cases and said people can now only spend the festive season for 24 hours on Christmas Day.

“As Prime Minister, it’s my duty to take difficult decisions and do what is right to protect the people of this country.

“Given the early evidence we have on this new variant of the virus, it is with a heavy heart that we cannot continue with Christmas as planned.

“In England, those living in Tier 4 areas, should not mix with anyone outside their household at Christmas.”