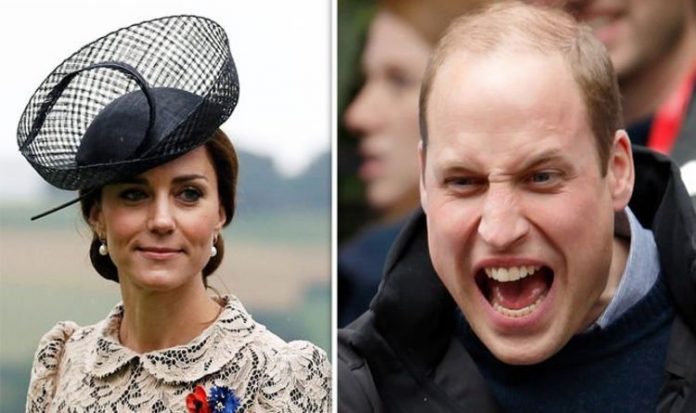 William and Kate are now the proud parents of Prince George, Princess Charlotte and Prince Louis. The Duke and Duchess of Cambridge met while studying at the University of St Andrews in Scotland and were friends for some time before their relationship turned romantic. Carly Massy-Birch was one of William’s love interests before he fell for Kate – but things did not go to plan when the three of them spent an evening together.

Carly, who lived across the road while Kate and William stayed together in their second year of university, attended a dinner party along with their other student friends.

But the second-in-line to the throne was furious when she made a jibe towards Kate.

Royal author Katie Nicholl claims it all started with a game of “never have I ever”.

In the game, still popular with British university students, people take turns in stating something they have never done.

The point is then that if someone in the group has done it, they must drink alcohol as a forfeit.

Ms Nicholl writes: “When it was Carly’s turn to play she announced, ‘I’ve never dated two people in this room,’ knowing full well that William was the only one who had because Kate was sitting next to him.”

William is then said to have “shot a thunderous look” at his ex-girlfriend before saying: “I can’t believe you just said that.”

The party-goers are said to have been left “in shock” at the confrontation.

Kate and William will not be spending Christmas with the Queen this year (Image: GETTY)

A source who spoke to Ms Nicholl said: “We knew they were together but it was the first time William confirmed his and Kate’s relationship in public.”

Prior to the incident, Carly is said to have been “grating” on Kate due to her close living situation.

Carly lived across the road from William and, Ms Nicholl adds in her biography ‘The Making of a Royal Romance,’ would wave to him from her living room.

The incident was the first of many awkward moments Kate and William endured in the early days of their relationship.

Kate and William with Charlotte and George (Image: GETTY)

The couple even briefly broke up in 2007 as the two had doubts about settling down together.

Author and broadcaster Vicky Ward claimed William wanted to “sow his wild oats” with the move.

Ms Ward writes: “He talked to friends during this time and basically expressed his confusion.

“On the one hand he loved Kate and wanted it to work.

“But he wanted to be sure he’d explored all his options.

Andrew Morton, famed for his iconic biography of Princess Diana in 1992, also explored the split in his book ‘William and Catherine’.

He writes: “Much to Kate’s distress, William ended their relationship.

“It was a storm that had been brewing for a long time, arising from his unwillingness to commit and the feeling his friends noted that ‘he could do better’.”

A close friend of the prince told Mr Morton: “He thought he could do better, but realised very quickly what he had given up.”

Kate Middleton and William: Expert on Scottish reaction to couple

The source continued: “William saw pictures of Kate coming out of Boujis [nightclub] or wherever without a care in the world.

“Quite frankly, he didn’t like the idea of another guy enjoying a roll in the hay with his girl.

“They had an up-and-down relationship at St Andrews because of his refusal to commit.

“After the break-up he realised what he really wanted in life.

“A kid from a broken home finds love, affection and warmth in a stable, steady family.”

William soon realised the error of his ways and opted to settle down with Kate, meaning she will one day become Queen consort when he ascends the throne.

They announced their engagement in November 2010, with Kate showing off the late Diana’s mesmerising engagement ring.

The Cambridges wed in a lavish ceremony at Westminster Abbey in 2011, an occasion fondly remembered by royal fans all over the world.

Katie Nicholl’s ‘The Making of a Royal Romance’ was published by Tantor Media in 2011. It is available here.