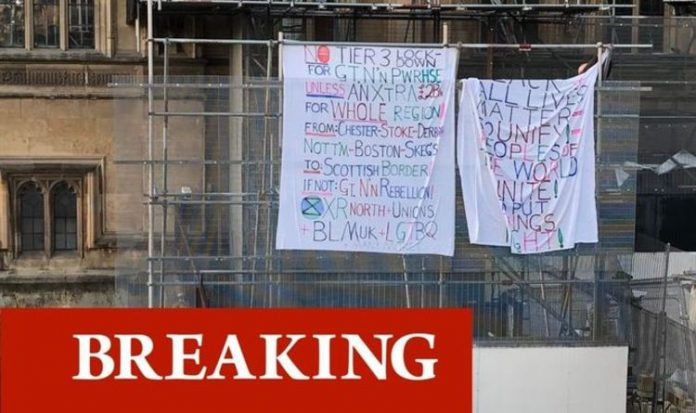 One of the banners unfolded on the iconic London landmark read: “No Tier 3 lock-down for Gt N’n Pwrhse unless an xtra £2bn for whole region from Chester, Stoke, Derby, Nott’m, Boston, Skeg’s to Scottish border.

The unknown activist climbed the monument just before 8am today.

The activist has called for additional funding to be handed out to areas which have been the hardest hit amid the recent rise of coronavirus cases.

A second banner read: “Black and all lives matter so unify peoples of the world, unite and put things right.”

“Officers are on scene and dealing.”

This protest comes just days after the likes of Liverpool, Lancashire and Greater Manchester were placed under the Tier 3 restrictions.

Under this tier, pubs and bars are closed again unless they can operate as restaurants.

Travel restrictions are also in place and there is a ban on household mixing both indoors or in private gardens.

London has been placed in the government’s second tier meaning household mixing has been banned indoors.

However, support bubbles will still be permitted.