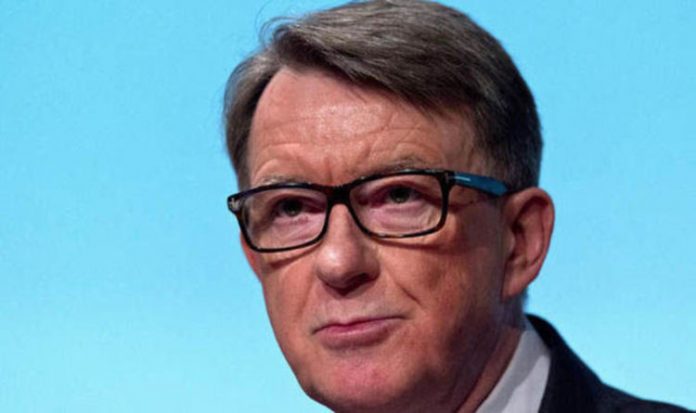 The peer is entitled to an estimated £35,000 a year when he reaches 65 but must follow the strict EU rulebook if he wants to keep his gold-plated retirement fund.

Lord Mandelson, an influential figure in Tony Blair’s New Labour, is entitled to his pension from Brussels after serving as a British commissioner from November 2004 to October 2008, before making a return to domestic politics.

This week, he made disparaging remarks about the 17.4 million Britons who voted Leave, branding them nationalists.

Under the terms of his EU pension, Lord Mandelson must abide by its strict loyalty clause or face being stripped of his pay-out altogether.

EU Commissioners must follow the tough ruleset “both during and after their term of office”.

One of the obligations means he must maintain a “duty of loyalty to the Communities”.

The guidelines states that “an official has the right to freedom of expression with due respect to the principles of loyalty and impartiality”.

Lord Mandelson faces being “deprived of his right to a pension or other benefits” if he fails to preserve his loyalty to Brussels.

The same rules apply to Tory peer Lord Patten and former Labour leader Lord Kinnock who were also European commissioners and have been campaigning strongly to stop Brexit.

Former European commissioners in office before May 1, 2004, are entitled to a pension worth 4.5 percent of the salary they last received for each year of service.

The Remainer’s index-linked EU pension is subject to preferential tax rates devised for Brussels officials and is stacked on top of his entitlement as an MP and income as a Labour peer.

Former MEPs and EU officials sitting in the House of Lords are receiving an estimated £500,000 a year in pensions, with their combined pot said to be worth around £10million.

Critics insist British taxpayers shouldn’t have to fork out for lavish perks enjoyed by the UK’s former commissioners and MEPs.

Senior Tory MP Peter Bone said: “I wonder if Mandelson and the others have to sing [the EU anthem] Ode to Joy when they get up in the morning.

“It really is ridiculous and it shows why we need to stop being members of this organisation which can make this sort of demand on people to just keep their pension.

“They live on a different planet.”

Former Ukip leader Nigel Farage said: “Mandelson is bound by his pension to be loyal to the EU, but it was outrageous that he would abuse half the country.”

Conservative MEP David Campbell Bannerman said: “All those EU Commissioners and EU officials, many of whom are in our House of Lords – such as Lord Mandelson and Lord Patten – do receive an EU pension with a restriction that they should not criticise the EU.

“This should be declared as a potential conflict of interest as the payment received is tied to a positive view only of the EU, but isn’t. This ‘be nice to EU’ restriction needs highlighting.”

Chloe Westley, campaign manager at the TaxPayers’ Alliance, said: “For too long, taxpayers in Britain have had to cover the cost of extravagant salaries, bonuses and pensions for MEPs and bureaucrats in Brussels.

He branded Leave voters nationalists who hate other countries and foreigners.

“They’re nationalists and should not be confused with patriots. I feel I am patriotic. I want the best for Britain. It’s why incidentally I voted Remain in the referendum although I entirely respect the contrary view of very many others.

“But these people, these Brextremists, they’re not like that. They are nationalists in the sense that they hate other countries, and they hate foreigners. “And that is, in my view, what motivates them and drives their behaviour.”