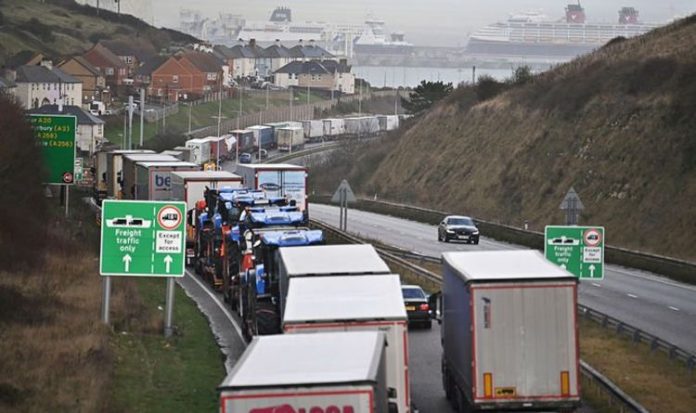 All entry between junctions 8, 9, 10 and 10a has been suspended to facilitate Operation Stack due to the 48-hour closure of the French borders. France imposed travel restrictions on the UK following news of a new mutant strain of the coronavirus. Traffic has now built up further on the. M20 and Junction 8 towards Hollingbourne to juntion 12 to Cheriton are both closed.

Highways England advise all road users to allow extra time for their journey and said delays are likely.

In a statement, they said: “The M20 coast bound in Kent is closed between junctions 8 and 11 as part of Operation Stack following the suspension of accompanied freight and tourist traffic France for 38 hours from midnight 21/12/20.

“HGVs destined for Dover Port and Eurotunnel Terminals will be ‘stacked’ on the eM20 coastbound between junctions 8 and 11 until the situation improves.”

They continued: “All frighted traffic should use M20 to enter the stack.

“Road users are also advised to allow extra time for their journey.”

Operation Stack is where parts of the M20 are used to queue lorries travelling towards the continent, to avoid causing gridlock across Kent’s road network.

This comes after France announced it would be suspending all traffic, including freight and passenger transport, from the UK for 48 hours.

Grant Shapps, the Transport Secretary, said: “We’re asking the public and particularly hauliers not to travel to Kent ports or other routes to France.”

He added that the Department for Transport was urgently working with Kent Resilience Forum, Highways England and Kent council on contingency measures to “minimise traffic disruption” in the area.

Other EU countries such as Belgium, the Netherlands, Germany and Ireland were among the 11 European countries to close their borders to the UK.

Prime Minister Boris Johnson is expected to chair a meeting of the Government’s Cobra civil contingencies committee today to address the situation.

A Downing Street spokesperson said: “The Prime Minister will chair a Cobra meeting tomorrow to discuss the situation regarding international travel, in particular the steady flow of freight into and out of the UK.”

The Department for Transport (DfT) said Manston Airport was being prepared to accommodate “up to 4,000 lorries” in a bid to ease congestion.

Leader of Kent County Council Roger Gough said plans were already in place to cope with traffic disruption following the end of the Brexit transition period.

Speaking to Times Radio, he said: “We’ve been doing an enormous amount of preparation for January 1 and that involves what is called Operation Brock, however what we are using is called Operation Stack, which is the method used in previous years where in effect you shut the M20 between junctions eight and 11.

“National government has urged vehicles not to come to Kent because we are anticipating some 17,000 vehicles coming into Kent to make the crossing over the next couple of days.

“The previous plans aimed at dealing with the impact of the end of transition were for holding vehicles – up to 7,000 – and so clearly there is a need for other measures.

“And that’s what we’ve now done with Operation Stack, not least because some of the other plans that we had quite deliberately were due to be activated in the days just before January 1.”

The Channel Port operator confirmed lorry drivers will not be exempted from the travel ban, meaning a potentially huge backlog of queuing freight to come.

Containers continue to be loaded onto ferries at the port (Image: PA)

“We are continuing to provide a service from France to UK but please check the latest travel regulations for both countries before departing.

“There is no exemption for freight drivers.”

Images from the Dover port show containers continuing to be loaded onto ferries.

Canadian Prime Minister Justin Trudeau also announced all flights from the UK will be prohibited for the next 72 hours.

He tweeted: “This afternoon, I convened a meeting with the incident Response Group.

“We focused on the new variant of COVID-19 identified in the UK and we have decided to implement new border restrictions in order to keep you – and people right across the country – safe.

“At midnight tonight, and for the next 72 hours, all flights from the UK will be prohibited from entering Canada.

“Passengers who arrived today are subject to secondary screening and enhanced measures.”

The new variant of the deadly virus was announced over the weekend and was the main strain causing infection rates to rise across London.

This came as the super-infectious Covid variant is understood to spread 70 percent quicker than the original strain of the virus.

The new figures were revealed during a press conference at Downing Street on Saturday.

Professor Chris Whitty, chief medical officer for England, said the World Health Organisation has been informed of the rapid spread of the new variant.

In a statement, Mr Whitty said: “There is no current evidence to suggest the new strain causes a higher mortality rate or that it affects vaccines and treatments, although urgent work is under way to confirm this.

“Given this latest development, it is now more vital than ever that the public continue to take action in their area to reduce transmission.”