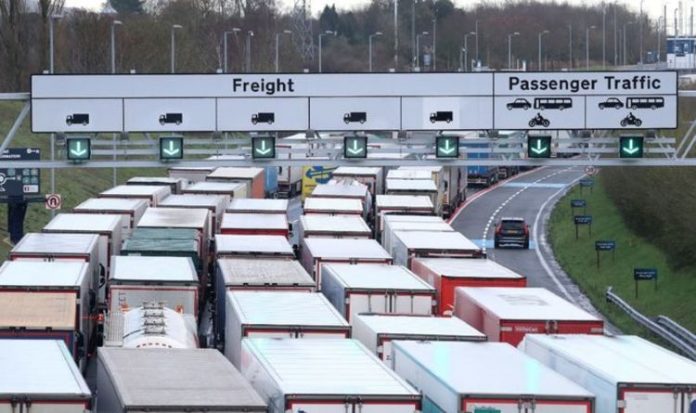 A live test on a moveable barrier system on a section of the motorway in Kent is being carried out by Highways England and its Kent Resilience Forum partners. Parts of the M20 will be closed between Maidstone and Ashford for four nights from Friday, with diversions in place for motorists.

The test comes as the UK and the EU are still to reach a deal with just weeks until the transition period ends on December 31.

The measure is part of Operation Brock, which is aimed at keeping the M20 open in the event of cross-Channel disruption.

The barrier on the motorway will be used to create a new layout with a contraflow system.

Highways England south east operations director Nicola Bell said: “We have again worked extensively with our partners in Kent and are confident that this test will provide a valuable dress rehearsal into the operation of our Kent-wide port disruption contingency measures.

“The test will help us to fine tune Operation Brock, finding ways to make the deployment quicker whenever the barrier is needed, whether it be in preparation for transition, or other disruption to cross-channel services.

“Operation Brock will keep Kent moving, and we thank road users in advance for their patience while the test is taking place.”

Transport Secretary Grant Shapps added: “Kent is a critical link to one of our busiest trade routes, and this state-of-the-art technology will ensure that we can keep the local road network moving.

“Testing this barrier now will ensure that if the system is needed it can be quickly and safely deployed, helping drivers get to where they need to be – even in the event of disruption at the end of the transition period and to assist with any other future disruption caused for any reason.”

“And that’s this kind of ratchet clause they’ve got in to keep the UK locked in to whatever they want to do in terms of legislation, which obviously doesn’t work.

“And then there is the whole issue of fish where we’ve got to be able to take back control of our waters.

“So there is a way to go – we’re hopeful that progress can be made.

“But I’ve got to tell that from where I stand now, here in Blyth, it is looking very, very likely that we will have to go for a solution that I think would be wonderful for the UK, and we’d be able to do exactly what we want from January.

“It obviously would be different from what we’d set out to achieve but I have no doubt this country can get ready and, as I say, come out on World Trade terms.”

Mr Johnson and Mrs von der Leyen, who met for dinner on Wednesday, have agreed to make a decision on the future of the negotiations by the end of the weekend.