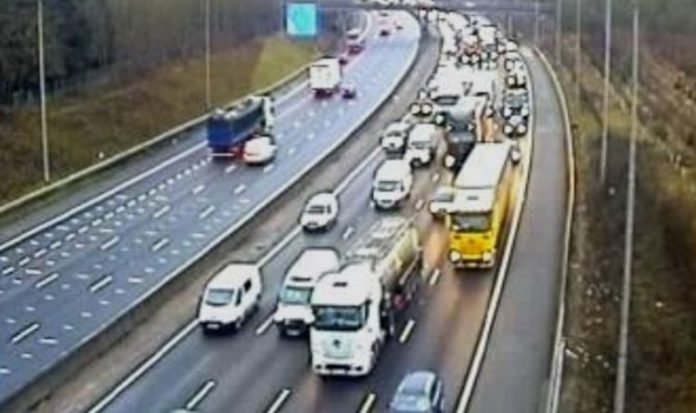 Highways England is reporting delays of up to 15 minutes currently.

They said: “There is a broken down HGV in Lane 1 of the M25 clockwise Junction 5 to 6 just after Clacket Lane Services – Lane 1 closure for stranded vehicle in force and to recover vehicle.”

Some motorists have reported traffic being at a standstill this morning.

“Really hope that everything is ok; haven’t seen it like this at this hour since last Feb.”

A separate traffic collision was also reported on the M60 this morning.

Two lanes were closed between junction 13 and 14 between St Helen and Swinton.

Officers were also dispatched to the scene although it is unclear if anyone was hurt following the crash.

JUST IN: Greedy SNP orders Boris to hand over £1.3bn due to EU exit

Emergency services have issued several warnings this month to road users due to the band of poor weather which has hit the country.

Last week, three yellow weather warnings were issued for snow and ice for the majority of the country.

These weather warnings are in place for Leeds, Manchester, Wakefield and Sheffield.

Chief Meteorologist Neil Armstrong, said: “A wide area of rainfall will move across central parts of the UK on Monday evening and bring heavy rain for the following 36-48 hours.

“The rain will be heaviest across western facing hills, in particular parts of the southern Pennines and northern Peak District where we could see up to 120mm over the course of the warning period with 40-70mm of rain widely across the whole Amber area.

“Heavy rain will impact the whole of England and Wales by Wednesday with Yellow warnings for rain in force.

“By Thursday 100-150mm of rain could fall over high ground in Wales and Northern England. As well as rainfall, rapid snow melt will add to these accumulations, adding 5-10mm in the worst affected areas.”