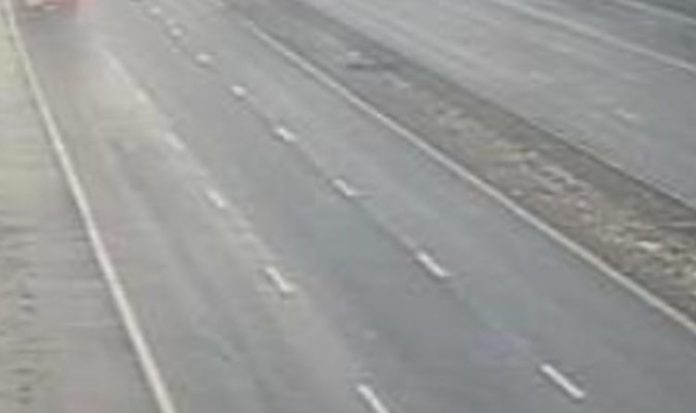 North West Motorway Police confirmed a serious road traffic incident took place on the M6 southbound between junction 28 and J27. Lancashire police, paramedics and an air ambulance have been called to the scene. A Lancashire Police Force Incident Manager said a HGV had collided with a bridge at J27.

All traffic was held before 12:30pm while emergency services rushed the scene, AA route planner reports.

The AA added debris remains on the road near J27 for the A5209 Crow Orchard Road.

Highways England warns motorists to expect queuing traffic of up to four hours.

In a post on Twitter, North West Motorway Police said: “Patrols are now on scene at the Serious RTC on the M6 at J28 to J27 Southbound,

“We will need to close the NB for Air Ambulance to land.

“The traffic is stopped whilst emergency services deal with the incident Live lane.”

“We have closed the bridge over junction 27 as a precaution.

“It’s a HGV that’s collided with a bridge.

In a post on Twitter shortly before 12.30pm, Highways England confirmed the M6 is closed in both direction at the exit and entry slip roads and warned the measures would be in place for at least four hours.

The agency urged motorists to avoid the area and reminded drivers they should only be conducting “essential” journeys in line with Government coronavirus guidelines.

Highways England said: “The M6 at J27 s closed in both directions between the exit and entry slip roads due to a serious collision.

“Avoid the area if this is part of an essential journey.

“The closure will be in place for at least 4 hours.”