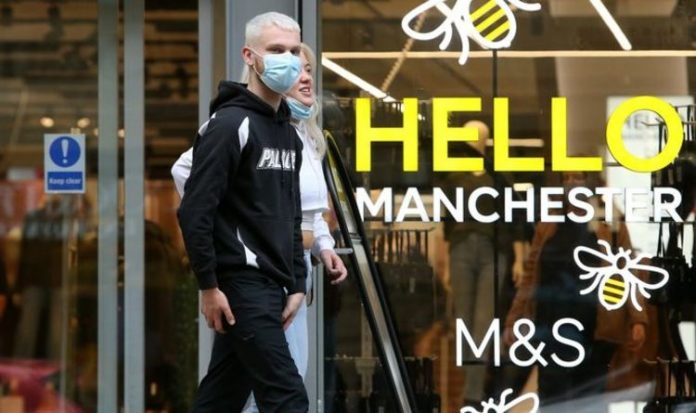 The north of England is currently fighting a bitter battle against COVID-19 in comparison to other parts of the UK, particularly in the south of England where the fewest cases have been reported. But the timing of an announcement has been delayed due to ongoing talks between officials about how and when a jump to Tier 3 restrictions would work – particularly in financial terms for the north’s largest city.

In a meeting on Wednesday, health officials from the Joint Biosecurity Centre suggested Greater Manchester, along with much of north-east and north-west England, as well as parts of Yorkshire and the Midlands should be moved into the top tier.

Local leaders, including Greater Manchester mayor Andy Burnham, have expressed concern over the Government’s lack of financial aid for areas put under the heaviest restrictions.

The mayor has been resisting following the Liverpool City Region into Tier 3 restrictions, citing the catastrophic effects it would have on local businesses, particularly within the hospitality industry.

The Prime Minister has said he will intervene and impose restrictions if an agreement is not reached.

He said: “On recent trends, in just over two weeks there will be more Covid patients in intensive care than at the peak of the first wave so I urge the mayor to reconsider and engage constructively.

“Of course, if agreement cannot be reached, I will need to intervene in order to protect Manchester’s hospitals and save the lives of Manchester’s residents.

“But our efforts would be so much more effective if we work together.”

When will an announcement be made?

Health Secretary Matt Hancock said in the Commons this week he did not want to pre-empt discussions with local leaders in Manchester as discussions on the terms of the north western city being moved into Tier Three.

Greater Manchestwr Mayor Mr Burnham gave an impassioned speech in a press conference, accusing the Government of treating the North “with contempt” and of trying to make it the “sacrificial lamb” for unproven measures that were being carried out “on the cheap.”

READ  Emily Thornberry: May’s deal will not have our blessing | Politics | News - UK

He said: “We have to protect the health of the nation but let’s do it as one nation, and not make the North of England the sacrificial lamb for an ill-thought-through Downing Street policy which doesn’t make sense in the real world.

Express.co.uk will update this page when a time for an announcement has been released.

Mr Hancock said “working together” is the best way to defeat the virus and rebuffed Labour’s calls for a circuit breaker lockdown.

Speaking in the Commons, he said: “In here, in this House, Labour calls for a national circuit-break.

“We take the view that we should do everything we can to control this virus where it is rising the fastest and take a more targeted approach.

“But the Labour Party can’t even get its mayors in other parts of the country, where the cases are going up, to come out and support the proposals that were made from that despatch box.

“So what I’d say is that we need to work together, we need to pull together, everybody should come together and that is the best way to defeat this virus.”

Elsewhere, millions more have been plunged into further restrictions as cases rise exponentially throughout the country.

Mr Hancock announced London, along with Essex, Elmbridge, Barrow-in-Furness, York, North East Derbyshire, Erewash and Chesterfield will move into the second tier of measures – including a ban on households mixing indoors, including pubs and restaurants.

The devolved nations are also taking steps to prevent further spread of the virus, including the closure of schools in Northern Ireland and further measures on pubs and restaurants.

Wales has made the move to completely ban travellers from high-risk areas entering the country from Friday.

Nicola Sturgeon is thought to be considering similar measures for Scotland and has urged Scots not to travel to areas of the UK under restrictions.

On Wednesday, a further 19,724 coronavirus cases were recorded in the UK, while 137 more people have died within 28 days of testing positive for the virus.