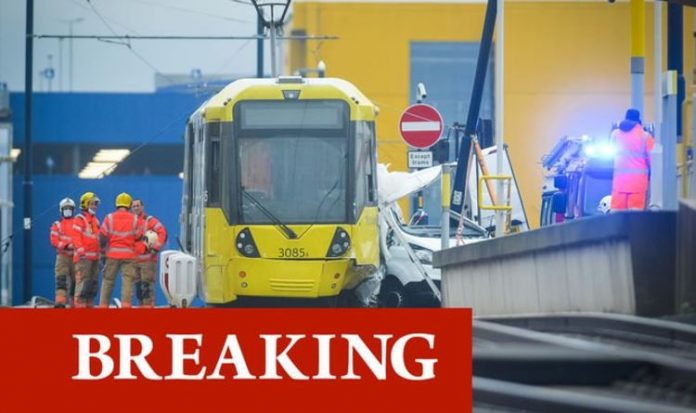 The Manchester tram hit a van near the Ashton West stop this morning. Police, fire crews and paramedics are all at the scene. Pictures from the scene show extensive damage to the van, with debris across the street.

A spokesman for Greater Manchester Police said: “Officers were called around 7.30am this morning to Lord Sheldon Way, Ashton-Under-Lyne to a report that a van had been involved in collision with a tram.

“Emergency services are in attendance.”

A spokesperson for Greater Manchester Fire and Rescue Service told the Manchester Evening News: “At around 7.30 this morning, two fire engines from Ashton and Stalybridge and the Technical Response Unit from Ashton were called to a report of a road traffic collision involving a tram and a transit van near Ashton West Metrolink stop on Lord Sheldon Way, Ashton-under-Lyne.

“Firefighters arrived quickly at the scene and, together with colleagues from North West Ambulance Service, used specialist cutting equipment to rescue one man who was conveyed to hospital by NWAS.

“Crews were in attendance for around two hours.”

A Transport for Greater Manchester spokesperson said: “Shortly after 07.30 this morning, TfGM was made aware that a van had collided with a tram at Ashton West.

“Emergency services are in attendance along with engineers and customer service representatives from KeolisAmey Metrolink.”

The van driver was taken to hospital following the crash. There are not believed to be any other injuries.