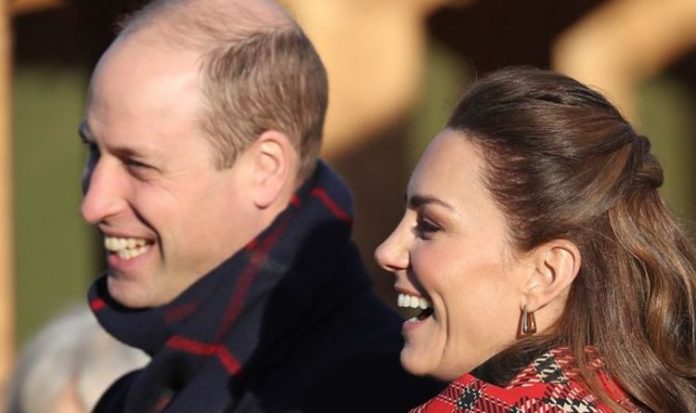 Kate, the Duchess of Cambridge and Prince William on Monday embarked on their first major tour of the UK since the start of the pandemic earlier in the year. The Duke and Duchess of Cambridge have attracted the praise of royal supporters for their commitment to their duties, with author Angela Levin suggesting the pair have appeared less tense since Meghan Markle and Prince Harry departed the Royal Family. Speaking to talkRADIO, Ms Levin said: “When you see that with Kate and William…when we saw them this morning, they were laughing.

“Kate was moving to the music and they’re very, very easy with each other.

“I think there’s been a big change since Harry and Meghan have gone that they feel more relaxed.

“Maybe not under attack and they feel very much like a team, you can feel that.”

Ms Levin also claimed Kate and William have been demonstrating their dedication to the British public with their efforts to do “the right thing” while on tour.

She continued: “I don’t really like that expression but you can see that they’re natural together and they both are hoping to do the right thing at the right time.

“And the way they talk and interchange, sometimes he does and sometimes she does.”

The Duke and Duchess of Cambridge have been commended for their hard work in keeping up morale during both the first lockdown and its aftermath.

India Hicks, the granddaughter to the late Lord Louis Mountbatten, admitted she  “hugely” admires Kate and William for their ability to balance their public and private lives.

She added: “Yet they’ve still managed to keep it private.

“So when everyone talks about the modernisation of the monarchy, they have done it.”

The pair will continue their tour of the United Kingdom with a visit to Wales, starting off in Cardiff on Tuesday morning.

Kate and William’s itinerary has been kept hush-hush in order to avoid crowd assembling and maintain social distancing.

They are however expected to personally pay tribute to NHS staff, social carers and volunteers from across the four nations of the UK.