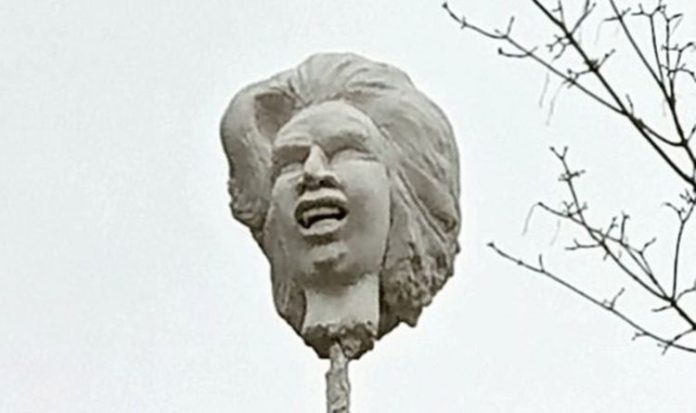 The effigy was placed on a plinth in Grantham which is due to hold a £300,000 statue of Ms Thatcher. Mark Robla, the local artist responsible, said this was done to protest “what she did to the community where I grew up in North Wales”.

However, the model triggered outrage on social media.

Historian Kate Maltby wrote: “I never cease to be amazed by the number of people who think it is acceptable to fantasise about the violent murder of our first female Prime Minister.”

Peter Whittle, a pro-Brexit member of the London Assembly, added: “And as to be expected, a c**p ‘artist’ too.”

Emma Webb, deputy director of the Free Speech Union, asked: “What would the reaction be if someone did that with Clement Atlee’s head?”

Ms Thatcher, a grocer’s daughter, was born in Grantham in October 1925.

She attended a local grammar school before securing a place to read Chemistry at Oxford University.

Explaining his actions Mr Robla said: “I’m from quite a working-class family and most of them are traditional Welsh and scousers as well so I think both sides weren’t big fans of hers.

In 2002 a different statue of the former Prime Minister was decapitated by a protestor at London’s Guildhall.

The attacker used a cricket bat and metal bar to damage the monument.

Describing how he erected his model in Grantham, Mr Robla said: “There was no breaking and entering. It has a metal fence around it so I’ve just gone in with my ladder and put it up in about five minutes.

“I had my high vis jacket on and the plan was to say I was measuring the plinth for the council if anyone said anything.

“I was just trying to put it up without being noticed that’s why I did it so early in the morning.

“The council have no idea, it’s one of those things that it’s easier to ask for forgiveness than permission.

“I supposed a head cut off on a spike is not overly obscene for today’s day and age.”

A bomb was detonated inside the Grand Hotel in Brighton where the Prime Minister was staying for the Conservative Party conference.