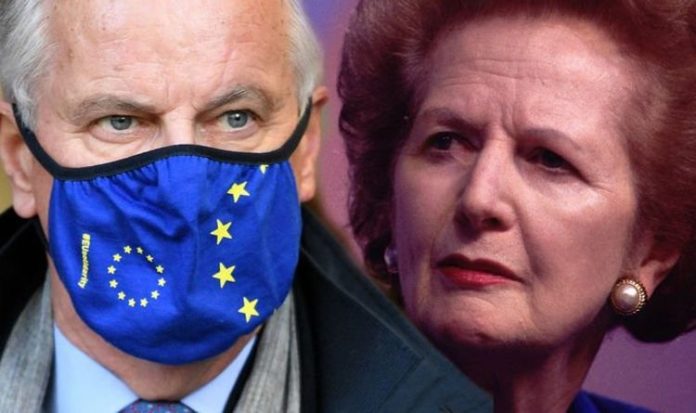 Trade talks between Britain and the EU are being held in Brussels this week, with time running out to agree a deal before the UK leaves the single market and customs union on December 31. Despite optimism at the start of November, both sides say daily meetings have produced little progress on the fundamental blockages that have dogged an agreement since the start of the year. As he arrived in the Belgian capital on Monday, the UK’s chief negotiator David Frost signalled that he will not be deviating from Prime Minister Boris Johnson’s “red lines” amid speculation that the departure of Dominic Cummings from Number 10 could herald concessions.

Downing Street has made clear more than once that Britain is not afraid of leaving the bloc without an agreement.

As the clock ticks down, former Ukip MP and Vote Leave co-founder Douglas Carswell told Express.co.uk how he believes former Prime Minister Margaret Thatcher would have handled the negotiations.

Mr Carswell said: “I think on Brexit, she would be pretty much where Boris Johnson, Michael Gove and the rest of the team are.

“I can’t really see how someone who believed in what she believed in, which is the nation state but also free markets and having good relationships with your neighbours, would have done anything different.

“What we are seeing is a deal that Conservatives can recognise as good.”

Mr Carswell’s claims are reinforced by what the Iron Lady wrote in her 2002 book “Statecraft”.

She argued only “credible threats of disruption” yield results in the bloc.

She wrote: “We can see that any concessions which Britain makes, or initiatives which she promotes, in Europe are always turned against her and against the original intention.

Baroness Thatcher famously negotiated a reduction of two-thirds of the UK’s net contribution in 1984, on the grounds that agricultural subsidies favoured small farmers and Britain has very few.

She banged on the table and demanded “our own money back'” during a summit with European leaders in Fontainebleau, France.

Her “correction” is arguably still a symbol of EU resistance.

The Iron Lady’s perseverance and determination is portrayed by actress Gillian Anderson in season four of The Crown, which was released on Sunday.

For example, in episode eight, the Queen finds herself at odds with the former Prime Minister, when she refused to cooperate with Commonwealth leaders and back tougher sanctions against South Africa and its Apartheid regime.