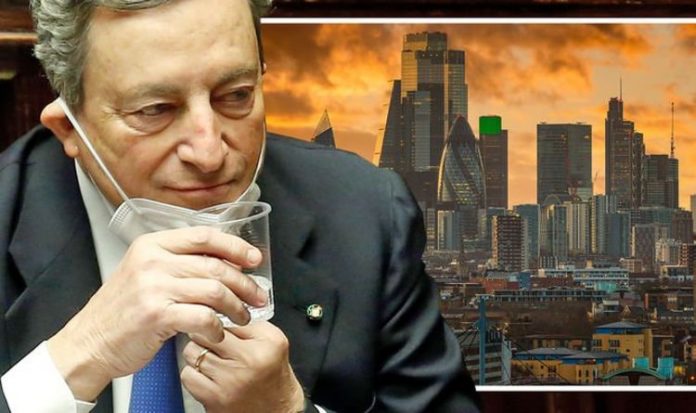 The former President of the European Central Bank, Mario Draghi, has been sworn-in as Italy’s next Prime Minister. Mr Draghi, a prominent economist, accepted the top role on February 12 and later that day read out a list of ministerial picks designed to create consensus among political parties. Italy’s government crisis was triggered in January when former Prime Minister Matteo Renzi’s Italia Viva party withdrew its support from the coalition, amid a row over how to spend the €200billion (£174.5bn)-plus that Rome is poised to receive from the EU’s coronavirus recovery fund.

The expectations that Mr Draghi will be able to reverse Italy’s fortunes are as high as the stakes.

Among his first major tasks will be to accelerate a vaccination programme as Italy strives to emerge from the coronavirus pandemic, which has so far left 93,000 people dead.

At the same time, he will be expected to rescue the economy from its worst recession since World War 2.

If he prevails, Mr Draghi is likely to bolster the entire eurozone, which has long fretted over Italy’s perennial problems.

As EU leaders all watch the next steps of the former President of the European Central Bank (ECB), a throwback speech with Mr Draghi has resurfaced, which sheds light on his relationship with Britain.

Speaking at the City of London Corporation, he said: “I cannot say which of the two sets of arguments is stronger, the economic or the political ones, neither am I going to enter into a domestic policy debate, but what I can say is that Europe needs a more European UK as much as the UK needs a more British Europe.”

His comments were seen in some Conservative circles as an attempt to influence the fierce debate over the UK’s stance towards Europe.

The Italian central banker, credited with spearheading a pledge to buy bonds in 2012 that eased financial market fears of a eurozone break-up, went on to list the many deep financial and economic ties between the eurozone and the UK.

He said: “With such deep interconnections, the UK and the euro area share a common interest: the stability in the functioning of our economic system and particularly our financial markets.”

Mr Draghi stopped short of making an explicit call for the UK to remain engaged in the EU but went on to outline the crisis-fighting measures, such as the creation of a so-called banking union, that would entail “some transfer of national sovereignty” in budgets and structural policies for eurozone members.

He added: “The answer to the crisis has not been less Europe but more Europe.”

Mr Draghi’s presence in London came amid tensions with the Treasury over what former Chancellor George Osborne believed was an attempt by the ECB to drag some euro-dominated trade away from the City into the eurozone.

While the UK was still a member of the EU, the City of London had to fight tooth and nail to protect itself.

In 2011, David Cameron’s coalition government even successfully launched legal action against the ECB, which at the time was headed by Mr Draghi.

An ECB policy paper wanted to see clearing houses based in the eurozone if they handled more than 5 percent of the market in a euro-denominated financial product.

But Britain asked the courts to strike down the rule on the grounds that it would have restricted the free movement of capital and infringed on the right to establish cross-border businesses across a multicurrency European Union.

If the policy went ahead, it would have undermined London’s financial market infrastructure – as it would have required that clearing houses shifted many of their operations to the eurozone, most likely Frankfurt or Paris.

A Treasury spokesperson said at the time: “This decision contravenes European law and fundamental single market principles by preventing the clearing of some financial products outside the Euro area.

On the other hand, the ECB argued that, in the interests of financial stability, it was necessary to locate financial market infrastructure in the eurozone so that crises were not handled by multiple central banks with conflicting interests.

DON’T MISS:
Brexit fishing solution that bypasses EU proposed by Le Pen’s aide [EXCLUSIVE]
Warren Buffett’s brutal analysis of eurozone: ‘Hope US never does it!’ [VIDEO]
Biden could pull rug from under UK’s Brexit dream as US is ‘ruthless’ [ANALYSIS]

Governor of the Bank of England Andrew Bailey (Image: GETTY)

Its policy stated: “As a matter of principle, infrastructures that settle euro-denominated payment transactions should settle these transactions in central bank money and be legally incorporated in the euro area.”

Britain ended up emerging as the winner four years later.

The Luxembourg-based court said in its ruling in 2015: “The ECB lacks the competence necessary to regulate the activity of securities clearing systems as its competence is limited to payment systems alone.”

Last week, Bank of England Governor Andrew Bailey warned the European Union against mounting a raid on the City of London, saying the “Old Lady” will “resist very firmly” any attempt by Brussels to force financial trading worth trillions of pounds to relocate after Brexit.

The EU granted the City of London temporary equivalence for derivatives clearing, enabling the activity to continue after the end of the Brexit transition.

The UK had hoped to obtain full equivalence from Brussels for clearing and other financial activities and is in talks to produce a post-Brexit memorandum of understanding, due next month.

However, Mr Bailey said that the recent attitude of the EU suggested that equivalence was a “sideshow” and the bloc’s real agenda seemed to be a “location policy” of shepherding as much lucrative financial services activity out of London and into the bloc as possible.