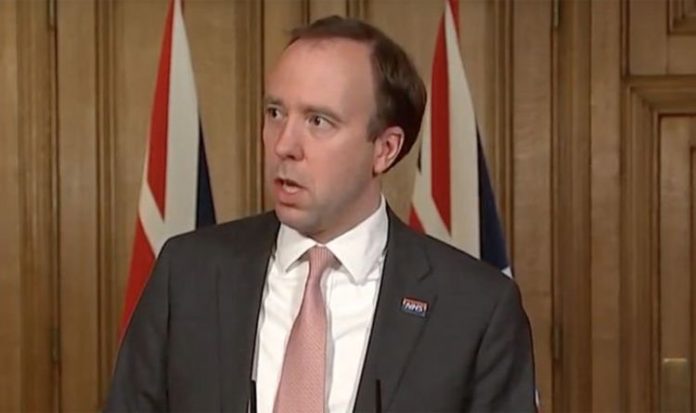 Matt Hancock was left squirming at the podium after a slide malfunction at the opening of his Covid briefing. The awkward moment saw the wrong slide appear at the start of the Downing Street briefing, prompting Mr Hancock to tell officials that the “wrong slide was up” as he updated the country on the latest coronavirus figures.

He said: “We will try to get the slide up, but in the mean time, what the slides shows is that the number of cases is now down to 1 in every 145 people but the pace is slowing.”

Minutes later, the technical difficulty was resolved, prompting Mr Hancock to say: “We have now been able to get the correct slide up!

“This demonstrates, as you can see, that there has been a fall in the number of a fall, but that the speed of that fall is slowing slightly.”

He added that the latest data shows the UK was moving in the right direction but the number of people in hospital remained “far too high”.

JUST IN: Covid vaccine calculator: Check when you could get vaccine

He reiterated that there was “significant pressure” on the NHS.

This comes as the Phase 2 priority list for the coronavirus vaccine has been revealed.

The Health Secretary confirmed that the Government will follow the Joint Committee on Vaccination and Immunisation (JCVI) recommendation on vaccination priority.

He added that the aged-based approach is “fastest and simplest way” forward.

It was also confirmed that the number of people who have received a first dose of a Covid vaccine has surpassed 19 million, now up to 19.1m.

Later in the briefing, Jonathan Van Tam urged people not to “wreck this” amid fears that vaccinated people will break lockdown rules.

He said that with about 40 million vaccine doses still to be given in the UK, “there is still a long way to go”.