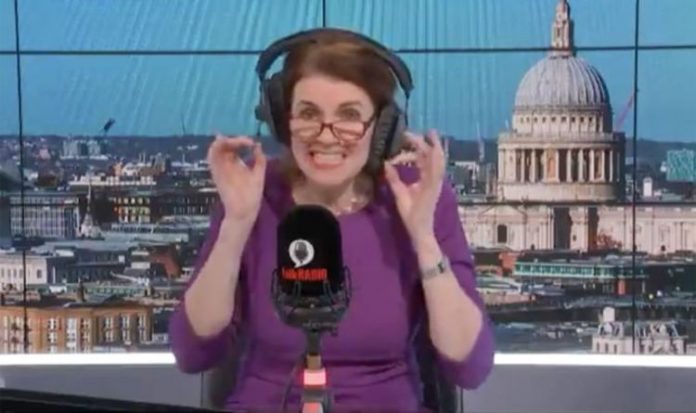 Julia Hartley-Brewer savaged Prince Harry’s interview comments to James Corden as “the exact opposite of what the Queen stands for”. Prince Harry revealed that he quit the Royal Family because it was “destroying my mental health” in a tell-all interview with the talk show host, who is also a close friend of the Duke of Sussex. However, the talkRADIO host said that the remarks reeked of a “me, me, me” attitude before criticising the timing of the interview’s release.

Prince Harry’s conversation with James Corden came out just hours after the Queen urged the public to get a Covid jab when they are offered one.

The Monarch, who received her first dose of the vaccine in January, urged everyone to “think about other people rather than themselves”.

Ms Hartley-Brewer said: “It’s not just the self-pitying, it’s the me, me, me. It’s such a sharp contrast to the Queen.

“She is on the front pages of the papers today, praising the rollout of the vaccine.”

JUST IN: Meghan and Harry ‘blocked’ from returning to UK as Queen stalls plans

She continued: “She has her husband, 99, in hospital. There are health concerns at her age for herself as well.

“But she is out there telling people to think about people other than themselves.

“And there he is sitting in the sunshine, with his multi-million-pound lifestyle in the US, going ‘poor me, poor me’.

“It is exactly the opposite of everything the Queen has stood over, which is not just never explain but also never complain.”

The Duke of Sussex continued: “It was a really difficult environment, which I think a lot of people saw.

“So I did what any father or husband would do and thought ‘how do I get my family out of here’.

“But we never walked away and as far as I’m concerned, whatever decisions are made on that side, I will never walk away, I will always be contributing.”

He added that it was a “really difficult environment” and criticised the press.

Palace sources branded the timing of the Duke of Sussex’s first TV appearance after Megxit as “unhelpful”.

According to insiders, the release of Prince Harry’s interview with his friend and TV host Mr Corden has created “disquiet” at Buckingham Palace following its clash with the Monarch’s vaccination plea to Britons.