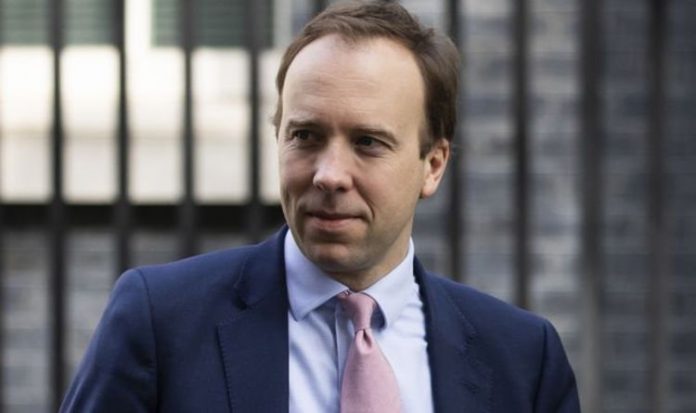 During the meeting, with the All Party Parliamentary Groups on Cancer and Radio­­therapy, Mr Hancock was told that up to 100,000 patients are still waiting for cancer treatment due to Covid-related delays.

Mr Russell, a project manager from Macclesfield, Cheshire, said he wanted to tell Mr Hancock that getting services back on track “is about simple humanity”.

He has launched the #Catchup­­WithCancer campaign, which has received 315,000 signatories and is backed by TV presenters ­ Gary Lineker and Victoria Derbyshire.

Mr Russell told the Health Secretary his daughter Kelly, 31, a beauty therapist, is one of thousands of patients whose vital cancer therapies were halted while the NHS focused on Covid-19.

During the meeting, Mr Hancock, right, vowed to review the figures.

Mr Russell said: “He was receptive and looked taken aback by the figures. He turned to his official and asked him to look into it.”

The statistics were compiled by charity Action Radiotherapy, which estimates the backlog will take at least six months to clear. It means the cancer crisis is now beyond the “point of no return” with at least 35,000 early deaths likely.

During the meeting, the Health Secretary had said the backlog has already been halved and will be “cleared in months”.

However he was told that with services still not operating at full capacity, catching up is unlikely to happen until the second half of 2021.

The new figures were based on a comparison of cases with previous years, and also include the pent-up demand of people still waiting for a diagnosis, not just those already in the system.

Mr Russell said: “Our daughter Kelly had her chemo put on a 12-week hiatus at the end of March. This was against her wishes. She died leaving a six-year-old son, Finley, behind.

She always fought to raise cancer awareness, so this campaign ­carries on her legacy.”

Matt Hancock ‘promised’ to look into cancer services after he was presented with waiting list data (Image: Getty)

He added: “I cannot bear the thought of others going through what my family has if there is a better way. If remedial action is not taken urgently, then we can see millions of family members impacted by the devastating loss of a loved one.

“This is about humanity. For cancer patients, a delay of even a few weeks can make the difference between a positive or terminal prognosis. These patients need a voice. Covid is real but it’s as if nothing else matters.”

Professor Pat Price, chairwoman of Action Radiotherapy and founder of #CatchUpWithCancer, said: “When the world changes we have to change the way we act. Covid has changed our world and one thing we need to change is how we are fighting cancer and, in particular, the awful backlog.

“I hear senior NHS people saying that things are slowly getting back to ‘normal’. But there are two things wrong with that – ‘slowly’ and ‘normal’.

There can’t be anything ‘slow’ in what we do. And the brutal reality is that we can’t just aim to get services back to normal. If that’s the limit of our ambition, we’ll never catch up.

“That’s why we’re urging Matt Hancock and NHS leaders to take a radical approach in speed, organisation and technology in cancer care.”

Tonia Antoniazzi, chairwoman of the parliamentary group, said: “The only way this backlog goes away is with action and resources deployed to tackle it.”

Mr Russell has compiled a spreadsheet of cases of people who have come to him reporting delayed cancer diagnosis, treatments or loss of lives.

Niamh and Maisie Eccleston-Tuohy lost their 55-year-old mother Chrissie to bowel cancer after her chemotherapy was stopped at the start of lockdown.

Niamh, 21, a dancer from Flintshire, north Wales said: “Although her cancer wasn’t curable, it was treatable and hadn’t spread.

The chemotherapy had kept it at bay. My family could have given her the treatment at home as we were all fully locked down.

Her cancer was far more of a risk to her than anything else.” By the time Chrissie returned to hospital in July the cancer had spread and she was given two months to live.

Tonia Antoniazzi is pushing for action and resources to be deployed to tackle the issue (Image: Getty)

Christie Lanquetin, 33, a mother of five from Kirklees, told how husband Antone, 44, died in June after his treatment for ­stomach cancer was stopped due to the pandemic.

Mrs Lanquetin, a charity support worker, said: “By the time treatment was restarted it was too late and he died a week later.”

A Department of Health and Social Care spokesman said: “Treatment for cancer has continued throughout the pandemic.

“The NHS has adapted how it runs its cancer services to ensure the safety of patients and staff – this includes establishing cancer hubs separate from hospitals ­dealing with Covid-19.

“Patients continued to be referred for urgent cancer checks and to start treatment throughout the peak of the virus, with ­numbers now increasing to near pre-pandemic levels.”