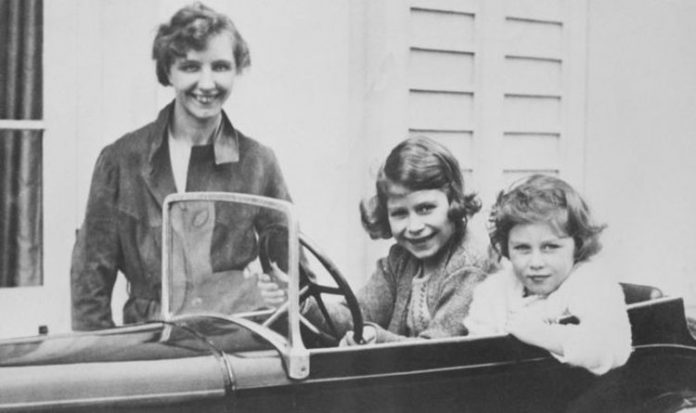 The young princesses play in a miniature car as Marion Crawford looks on (Image: Bettmann)

Marion Crawford, subject of my new novel, The Governess, is the most important Royal influence of whom you have almost certainly never heard. And she never intended it otherwise. Her vocation was not with Royalty; she wanted to work with poor Edinburgh slum children. But she found herself teaching at the opposite end of the scale, as governess to the young Princess Elizabeth and her little sister Princess Margaret.

But when, in 1932, Marion came south to start work with the Windsors, she did not leave her progressive ideas behind. Deciding that the little girls led too formal an existence, she introduced them to real, not Royal, life. “Crawfie” as they called her, took them out of the palace and on to the tube, shopping at Woolworths and swimming in public baths. She even started a Buckingham Palace Guide Pack.

In doing all this, she changed forever the way that Royal children are brought up. Thanks to the new confidence in the outside world that Crawfie made possible, they would be educated at school. As for Royal nannies, who looked after babies and oversaw bed, bath,
and dressing, a more relaxed approach would be the new norm.

Princess Diana in particular was determined to be “hands on” with her children. Lots of hugging, kissing and fun would be the order of the day. But, being an aristocrat, and a princess to boot, Diana would obviously not be looking after her boys all the time. Nannies were required, but the likes of the ultra-formal, intensely territorial Clara Knight, who ruled the nursery with a rod of iron during Princess Elizabeth’s childhood (and was the bane of Crawfie’s life) were gone for good. Diana recruited markedly warmer characters.

Barbara Barnes, known as Babs, looked after Prince William from birth and was so close to him that he climbed into her bed every morning before breakfast. Jessie Webb, an outspoken cockney, who joined the household later, focused more on Prince Harry.

Considering him far too thin, she would fill the nursery fridge with sausages, buns, bacon and doughnuts and harangue the chefs into serving him meat and potatoes rather than pasta. The Waleses’ marriage was by then on its last legs and Webb would steam into rooms where Charles and Diana were rowing, whisking off the boys to get them out of earshot. They repaid her with enduring loyalty; William asked her to his 21st birthday party.

After Charles and Diana’s divorce came that most famous of all royal nannies, gung-ho, glamorous Alexandra “Tiggy” Legge-Bourke. With her mane of long hair and form-fitting jeans this turbo-charged super Sloane smashed the dowdy nanny mould to smithereens. So devoted were the princes that William actually told his parents not to come to Eton’s traditional Fourth of June celebrations and asked

Tiggy instead. It is perhaps little wonder that Princess Diana became jealous; even the normally genial Camilla Parker-Bowles is supposed to have waspishly referred to Tiggy as “the hired help”. Tiggy hit back, reportedly claiming that Diana gave her boys popcorn and cinema, while “I give them what they need at this stage. Fresh air, a rifle and a horse.” What Clara Knight would have made of this can only be imagined.

She would never have dreamt of crossing that line between employer and employee, Royal and commoner, over which Tiggy bounded so happily. Having aristocratic connections herself no doubt had something to do with it; Tiggy grew up on a 6,000-acre Welsh estate. But it is possible she had taken things too far in the opposite direction. In any case, after a controversy involving abseiling, she left for pastures new. She remained close to the princes nonetheless, attending both their weddings.

Prince William seems to have steered things back in his childcare arrangements. While Kate has gone to great lengths to seem normal, referring to “mum guilt” and the “constant challenge” of parenthood, their choice of nanny is traditional. Maria Teresa Turrion Borrallo, graduate of the ultra-posh Norland College, has none of Tiggy’s tossing hair, tight trousers and exuberant lipstick.

In her rare public appearances the fortysomething strikes a subservient figure, often in the Norland uniform of beige dress and brown bowler, set off by a pair of no-nonsense brogues. Her well-scrubbed face has no hint of make-up.

This approach, with its suggestions of older Royal procedure, inevitably contrasts with what Prince Harry and Meghan Markle are doing. Or seem to be doing, as few people really know. They have taken the route of the 21st-century mega-celebrity and thrown a veil of secrecy over everything personal that relates to them, their son in particular.

Mystery has surrounded Archie from the off, from the place of his birth to the identity of his godparents. Harry and Meghan are obviously keen to appear as his principal carers, but according to recent reports they have an extra pair of helping hands in the form of Meghan’s mother Doria Ragland.

The Duke and Duchess of Sussex with their baby son Archie in 2019 (Image: Getty)

What all this shows is that Royal upbringings, once stiffly uniform, have become highly individual. Royal parents now make their own choices. But what is certain is that this entire process began with one woman, Marion Crawford, the twentysomething student teacher who was persuaded down from Scotland, initially for a trial month.

That month became a stay of 17 years. Like Jessie Webb and like Tiggy Legge-Bourke, who was at Balmoral the night Princess Diana died, Crawfie had her fair share of Royal drama. In her case it was the seismic events of the 1936 Abdication, the 1937 Coronation and the Second World War that she had to steer her charges through.

Her devotion was unflinching and her sacrifice, of a personal life absolute. When the Royals finally let her leave, in 1949, it was too late for Crawfie to have children of her own.

And yet, unlike those who came after, she was never invited to weddings or landmark parties. The reason was a harmless memoir, The Little Princesses (1950), which she wrote after leaving Royal service. It was harmless and loving, but the Windsors considered it an act
of treachery.

The Governess by Wendy Holden is published by Welbeck on Thursday (Image: Publicity picture)

They cast her off. The heartbroken Crawfie fled to Aberdeen where she bought a house by the side of the Balmoral road, hoping her former charges would stop one day and forgive her. They never did and when, nearly four long decades later, she died in 1988, not a single Royal flower appeared at her funeral.

By the time, five or so years ago, I came across The Little Princesses in a bookshop one rainy half-term day, it had long been out of print and its author forgotten. But, flicking through it, I was struck by the glamour, drama and amazing contradictions of her story. I immediately wanted to turn it into a novel, which became The Governess.

In doing so, I hope I have brought the long-buried tale of this extraordinary woman to a wider audience. In helping to build our Queen, she had an effect on all our lives. We all owe something to Marion Crawford.

The Governess by Wendy Holden is published by Welbeck on Thursday for £12.99. See Bookshop on page 69.