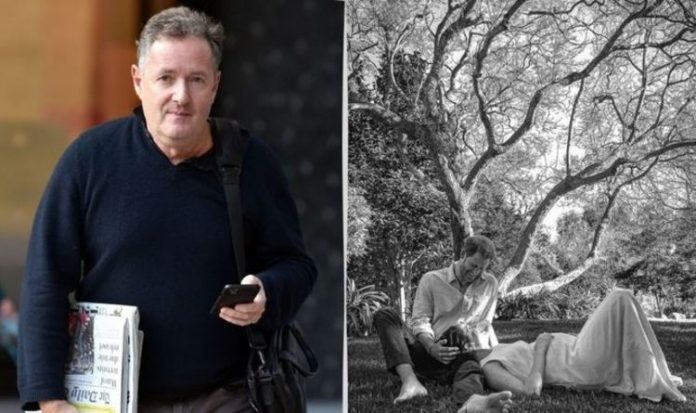 The Duke and Duchess of Sussex released a black and white photo of themselves relaxing in a garden, with Meghan, 39, cradling her growing baby bump. A spokesperson from the pair confirmed that they are expecting their second child.

Piers, Meghan’s former friend and co-host of ITV’S Good Morning Britain, took to Twitter to comment on their announcement.

He tweeted the snap released by the Sussexes and said he believed the couple had chosen to release it to make sure their story gets more attention from the press.

Piers wrote: “BREAKING: Harry & Meghan have announced they’re pregnant and released this cheesy photo of themselves to ensure the media gives the story about their private life more prominence – in their latest courageous effort to stop the same media focusing on their private life.”

A spokesperson for Harry and Meghan said: “We can confirm that Archie is going to be a big brother.

It is not clear where the photo of the Queen’s grandson and his American-born wife was taken.

However, the background looks similar to the garden surrounding their £11 million Montecito mansion.

In the run up to the US presidential election in November, Harry and Meghan filmed a video shot in the lush gardens.

In an op-ed for the New York Times, the former senior royal said her second pregnancy ended in tragedy in July.

She explained how she held little Archie in her arms as the knowledge of what was happening began to sink in.

She wrote: “I knew, as I clutched my firstborn child that I was losing my second.”

Harry and Meghan’s baby announcement comes just days after the duchess won her dramatic High Court battle against the Mail on Sunday.

The duchess sued the newspaper’s publisher, Associated Newspapers Ltd (ANL) for publishing extracts of letter she sent to her estranged father months after he missed her May 2018 wedding.

Meghan asked a High Court judge to deliver a summary judgement, with her lawyers arguing that ANL had no defence to allegations that the articles had invaded her private life.

Lord Justice Warby agreed, ending the privacy claim in a win for Meghan.

This avoided the need for a trial.

However, the court action is not over for Meghan as a secondary claim of copyright infringement was not totally dismissed.

A future hearing on the matter is due to be held next month while a third allegation against ANL around data protection is still live.