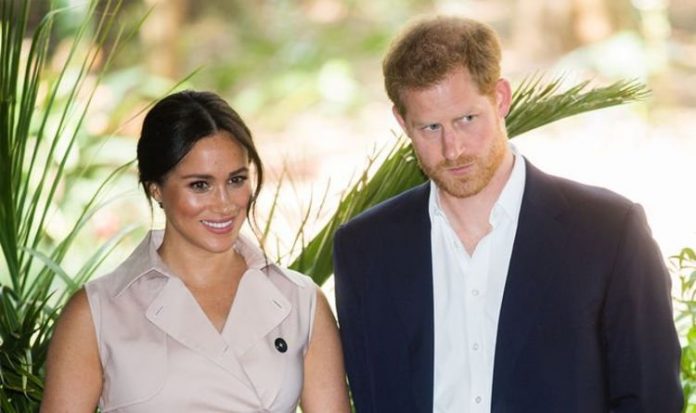 Meghan Markle: Expert on possible reaction to Kate and William

The awards will reportedly reward individuals, charities and companies for their efforts in “charitable services, education, science, literature, racial justice, gender equality, environmental stewardship, youth empowerment, health and mental health”. These awards have naturally been compared to the Queen’s honours system of MBEs, OBEs, CBEs, knighthoods and damehoods, among others. Some sections of the media have claimed the Sussexes’ honours are meant to rival the UK honours system, but they have vehemently denied this.

The couple’s spokeswoman said: “We look forward to sharing more about Archewell’s work in the weeks ahead, but any suggestion that it is intended to rival the UK honours list is false.”

That said, there are startling similarities between the two systems, both of which are designed to recognise people’s public service and contribution to society.

On ITV’s Good Morning Britain, Susanna Reid argued that the Duke and Duchess of Sussex are simply trying to reward people who have achieved “incredible things”.

Meghan and Harry were accused of “copying” the Royal Family (Image: GETTY)

The Queen’s honours are given out twice a year (Image: GETTY)

Indeed, the honours system is a very important part of the Royal Family’s duties; while the honours committee decides who will receive the awards, they are officially given out by the Queen and other members of the family will often take part in the ceremonies.

One social media user has taken the view that the couple are merely “copying” the Royal Family, despite the fact they stepped down as senior royals to forge their own path.

They argued that creating an awards system like this is a clear parallel and may indicate them trying to mimic the Royal Family across the pond.

They said on YouTube: “They’re literally just copying what the royals do when in fact they didn’t want to be royal.

Ronnie Corbett after he received a CBE (Image: GETTY)

“But they did, they wanted half-in half-out, but they got pushed out and now they’re trying to rival and have their own court in America ‒ not going to happen.”

They also argued that the news about the Archewell awards has overshadowed Prince William and Kate’s Royal Train tour.

The Duke and Duchess of Cambridge have embarked on a three-day, 10-stop, 1250-mile journey across England, Scotland and Wales.

They have been thanking key workers for everything they have done during the coronavirus pandemic and meeting communities to learn how they have been affected by the virus.

Kate and William on their Royal Train tour (Image: GETTY)

The social media user, who goes by the name of Murky Meg, claimed: “The reason it’s hit the headline is that Kate and William are off on their Royal Train tour, so we’re expecting something to try and knock them off the top.

“And lo and behold this has been released.”

In a bizarre twist, it has also emerged that less than a year ago Prince Harry actually claimed that prizes “make no difference” when trying to solve climate change, yet now one of Archewell’s awards will be for “environmental stewardship”.

The Duke of Sussex was prank-called by Russian YouTubers on New Year’s Eve last year pretending to be Greta Thunbrg and the recording of the phone call was released in March.

Among Harry’s comments, when he believed he was talking to the teenage climate change activist, was his claim that prizes do not work.

He said: “I think people need to be woken up and the only way to wake people up from what is effectively a consciousness crisis, I think, you need to be doing extreme things.

“And small steps or giving out prizes doesn’t make any difference.”

However, he added: “I’m confident within the next five to ten years things will change but we can’t wait five or ten years.”

These comments were allegedly made on the same day that William and Kate announced their Earthshot Prize and has therefore been interpreted by some as a snub to his brother.