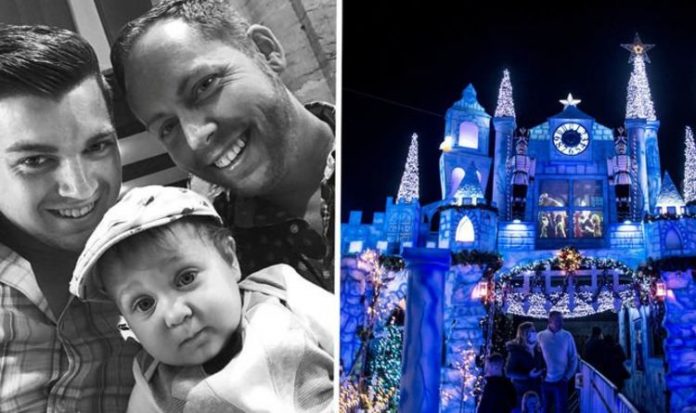 Dan and Mark Extance’s winter wonderland features reindeer, Christmas trees and thousands of lights. The Christmas-crazy couple have been elaborately decorating their home in Tintinhull, Somerset for seven years. Dan said: “Every year we never quite match our own expectations because we want it be bigger and better.

“Time is always the issue. We both work full time and there never seems to the chance to get it as we want.

“All we hope is that it brings joy to people and raises money for charity.”

Funds from their collection box will go to the NHS, the local air ambulance and other good causes.

Dan started the project after being diagnosed with testicular cancer in 2008.

He was ill for five years and during that time had a lot of help from Macmillan Cancer Support and charity It’s in the Bag.

That inspired him to give something back…and to do something festive for the community.

He said family and friends have all pitched in to help to assemble the structures.

Dan and husband Mark, 27, have been together for nearly 10 years and married for six.

Dan said his favourite bit this year was “our new castle extension, with the window scene of Santa and the elves working”.

He added: “We both love Christmas! We started the village scene in August – the main build took eight weeks.

“We love anything theatrical and used to do the carnival. Last year we raised just under £3,000, so it would be lovely to beat that!”

The scene has attracted visitors from all over – although Dan said that has been tough to manage during a pandemic.

He said: “Normally we would be thrilled, but with what’s happening lately we have had a lot of stress! Especially with people parking in silly places.”