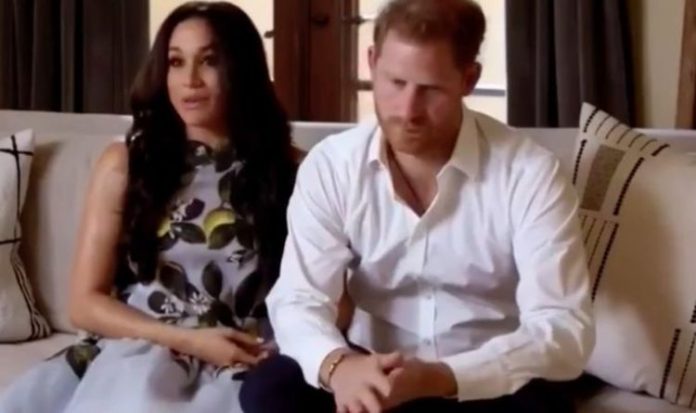 The Queen’s refusal to “figure something out” for Prince Harry and Meghan Markle may make the couple reluctant to return to the UK, royal commentators have warned. The Duke and Duchess of Sussex had given back their remaining patronages and honorary appointments after confirming to the monarch that they would not be working royals again. Royally Obsessed podcast hosts Rachel Bowie and Roberta Fiorito discussed why the decision was such a disappointment.

Ms Bowie told listeners: “We would just feel so great to see [Meghan and Harry come back], and see a model where the family was able to figure something out.

“Instead, I can’t imagine it would feel for Harry and Meghan.

“Right now they’re blocked from returning because of the pandemic.

“But would it even feel good to come back right now? I can’t imagine seeing them back soon anymore.”

Ms Fiorito added: “On the bright side, I feel like they are still so happy to have their private patronages.

“So they have Mayhew and Smart Works for Meghan.

“They also show that what they want to do is something like donating to a women’s shelter in Texas.”

The host added: “I think they have the freedom now to do that.”

Ms Bowie agreed: “They have the complete freedom, but it’s still sad to me.

“I just wish there was a way to have continued Harry and Meghan’s role formally, somehow, and kept them in.

“But I do think we’ll get back to that because this is an evolution.

“When Charles comes on the throne, and William eventually, I think that this is all going to evolve, this role and relationship.”